We are pleased to introduce this M&A and Private Equity newsflash offering a brief overview of 2019 and the outlook for 2020 in the Baltics and Belarus. Although the number of announced transactions in the Baltics decreased after a record-breaking 2018, nevertheless 2019 still remains the second best year to date in terms of number of deals. In this newsflash we take a closer look at the main M&A and Private Equity (PE) market trends and shifts in the last year and attempt to forecast what this year may bring.

Main trends in the Baltic M&A market in 2019

Based on Mergermarket statistics, 68 M&A transactions were announced in 2019 – 14% fewer than in 2018, with 79. However, 2019 remains the second best year to date in terms of number of deals. The total disclosed value of all announced transactions in the Baltics in 2019 decreased more dramatically – 2.4 times (from EUR 2.757 billion in 2018 to EUR 1.113 billion in 2019). However, if we exclude Blackstone Group’s acquisition of Luminor Group in 2018 (this exceptional deal was valued at EUR 1 billion), total disclosed value in 2019 (compared to 2018) would be lower by rather more than one-third.

Another reason for the decrease in total disclosed value is that the values of only eight transactions were disclosed in 2019 and some large multimillion deals (eg Citadele Bank’s acquisition of UniCredit Leasing Baltic operations and Marubeni’s acquisition of shares in Conexus Baltic Grid) were not disclosed. Furthermore, according to unofficial information, the actual value of the acquisition of Baltic Classifieds Group by Apax Partners might be higher by at least twice the sum indicated in the Mergermarket database.

In any case, while such a small sample of deals with disclosed value does not allow any definite conclusions, it may also be an echo of somewhat slowing M&A activity globally as the value of global M&A in 2019 (compared to 2018) was down by 6.9% and European M&A even more – by 21.9%. The CEE/SEE region stood somewhere in the middle with the same amount of deals announced last year, but with a 17% decline in their value (compared to 2018). 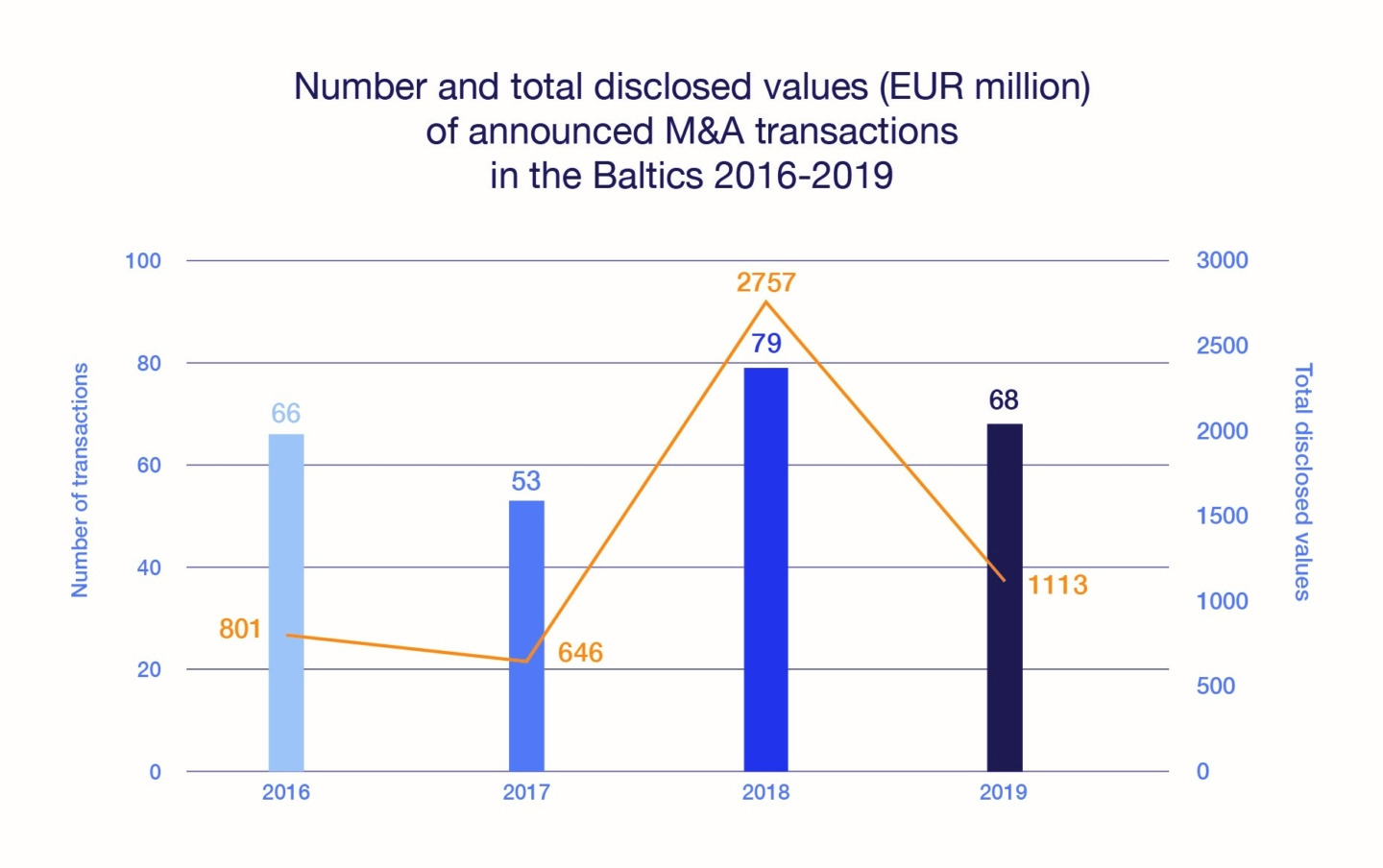 Lithuania catches up with Estonia in terms of number of transactions (almost). Based on Mergermarket statistics, in 2019 a record number of deals in Lithuania – 28 – was announced (the previous record was 27 deals in 2011 and 2018). Statistically Estonia, which led the Baltics for three years in a row, now shares first position with Lithuania, also with 28 transactions announced. However, it should also be noted that two of those transactions (INVL Baltic Sea Growth Fund’s investment in Grigeo’s cardboard manufacturing business and the acquisition of Splius by Cgates) have been cancelled, two other regional transactions attributed to Lithuania as deal-dominant geography (eg acquisition of Baltic Classifieds Group by Apax Partners) could also be attributed to Estonia. So, it seems that Estonia still retains the lead by number of completed deals.

Estonia also stayed on top in the Baltics by total disclosed value of transactions with EUR 474 million, leaving Lithuania in third place with EUR 308 million. Latvia had only 12 transactions announced ‒ its lowest since 2010 (the same result as in 2012 and 2016). However, the actual value of these transactions was quite high. Next to the disclosed values of two transactions totalling EUR 345 million (which is still the second-best result in the Baltics in 2019), Latvia also had at least two other deals with undisclosed but ‒ according to unofficial information ‒ high values: (a) Marubeni’s acquisition of a 29.06% stake in Conexus Baltic Grid AS (provider of natural gas transmission and storage) and (b) Citadele Bank’s acquisition of UniCredit Leasing SIA (pan-Baltic leasing operator) and SIA UniCredit Insurance Broker (insurance service provider). Overall, taking into account the small number of transactions with disclosed values, we may only conclude that there is space for increasing transparency in deal values in the Baltics. 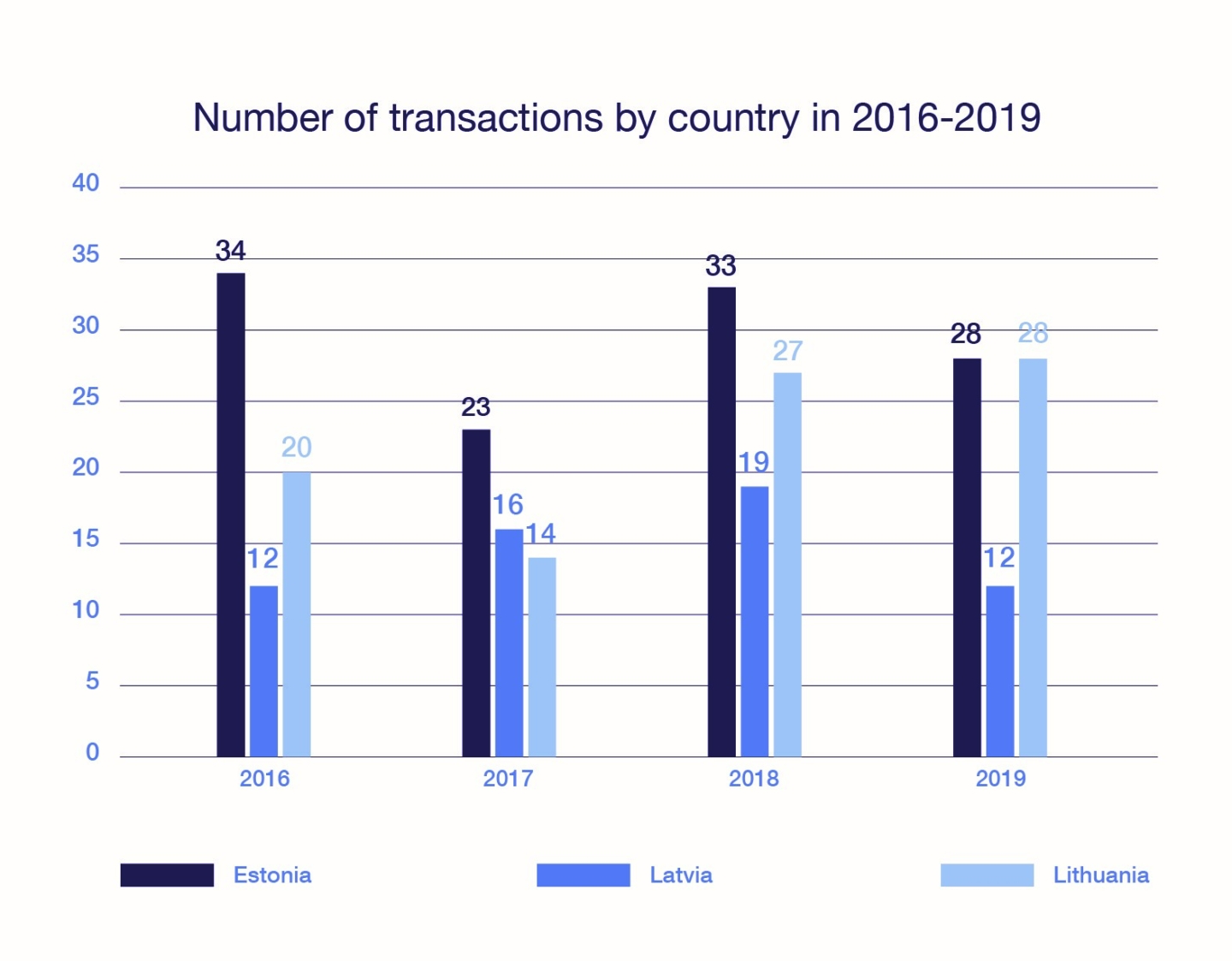 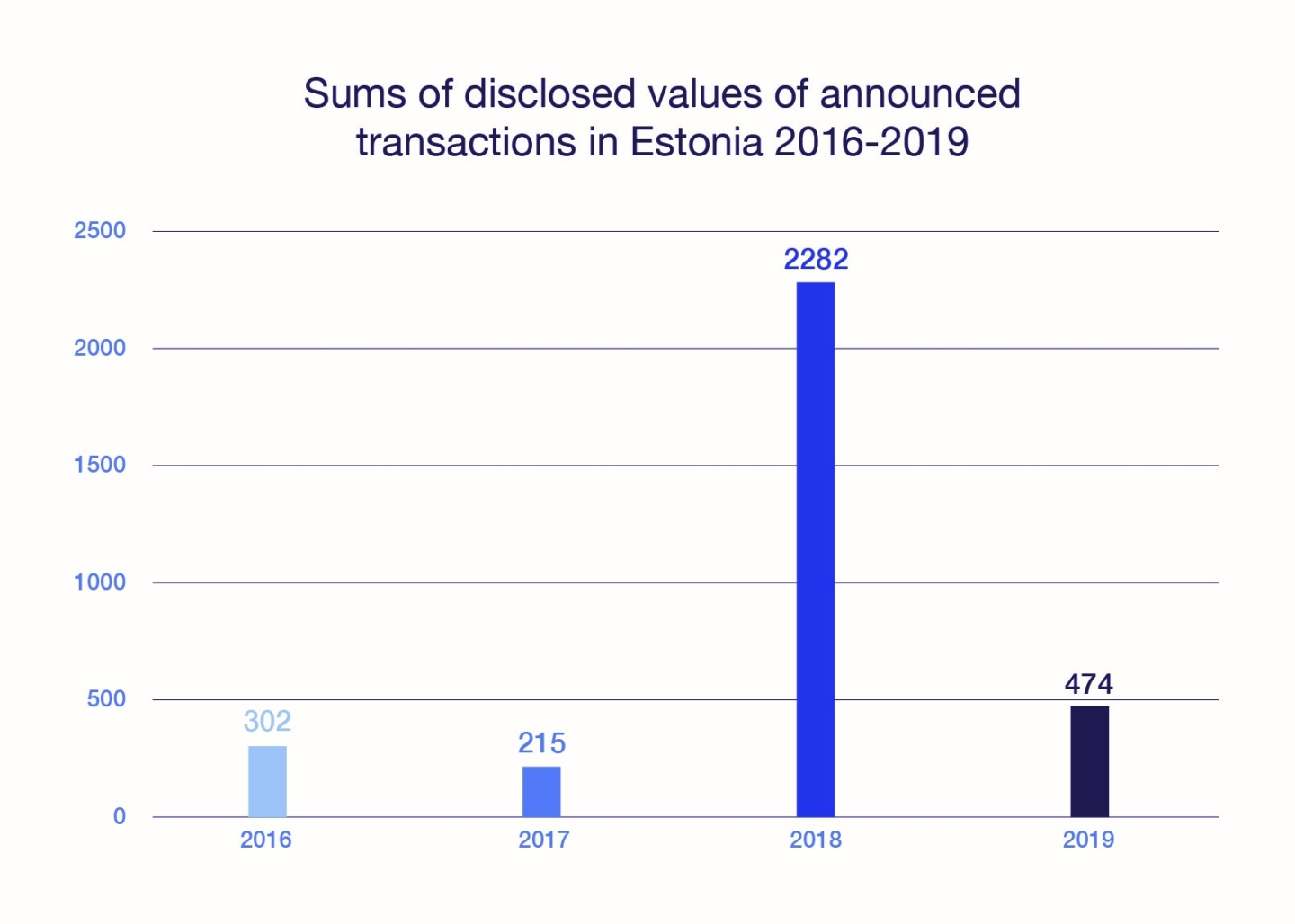 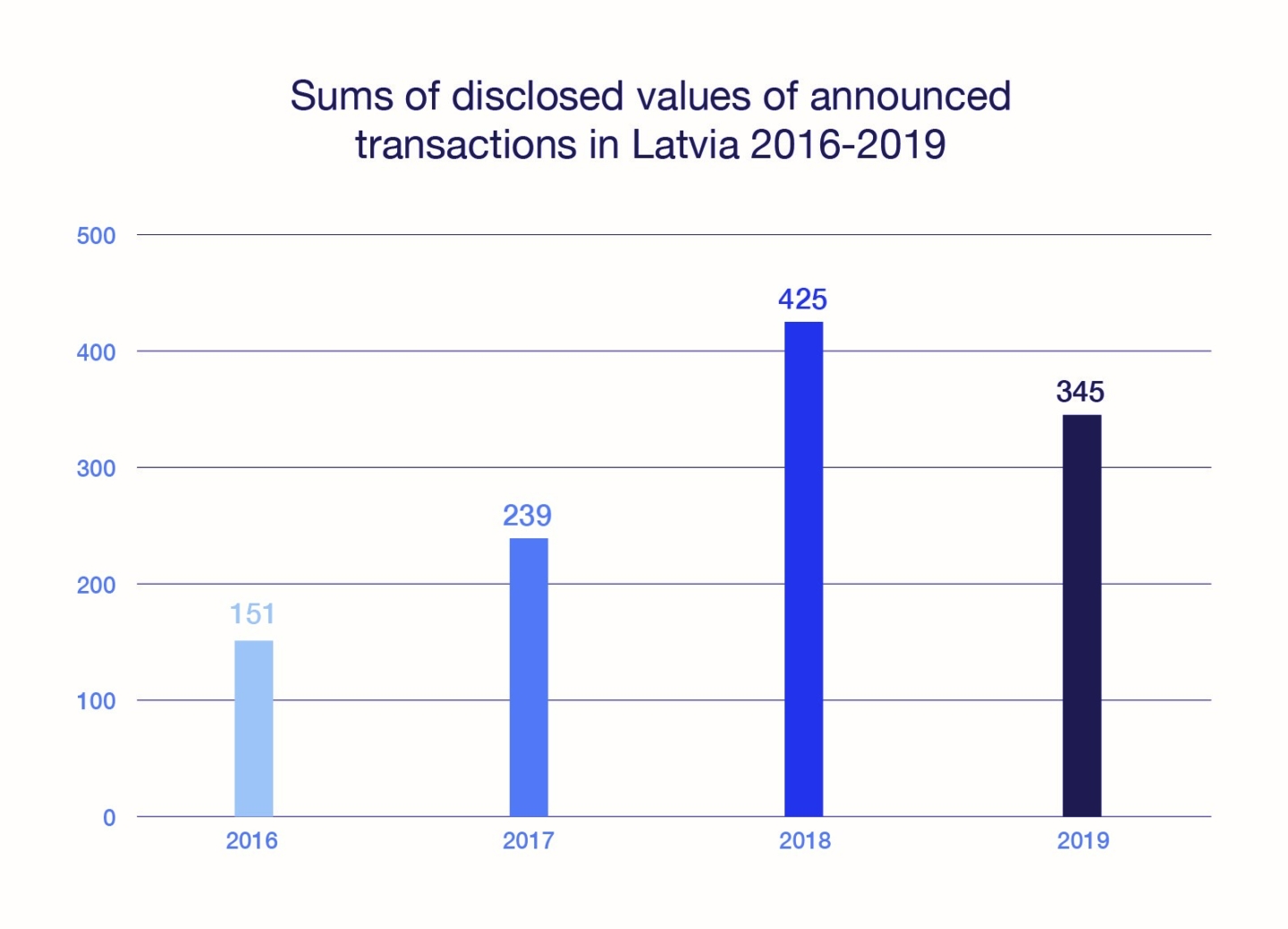 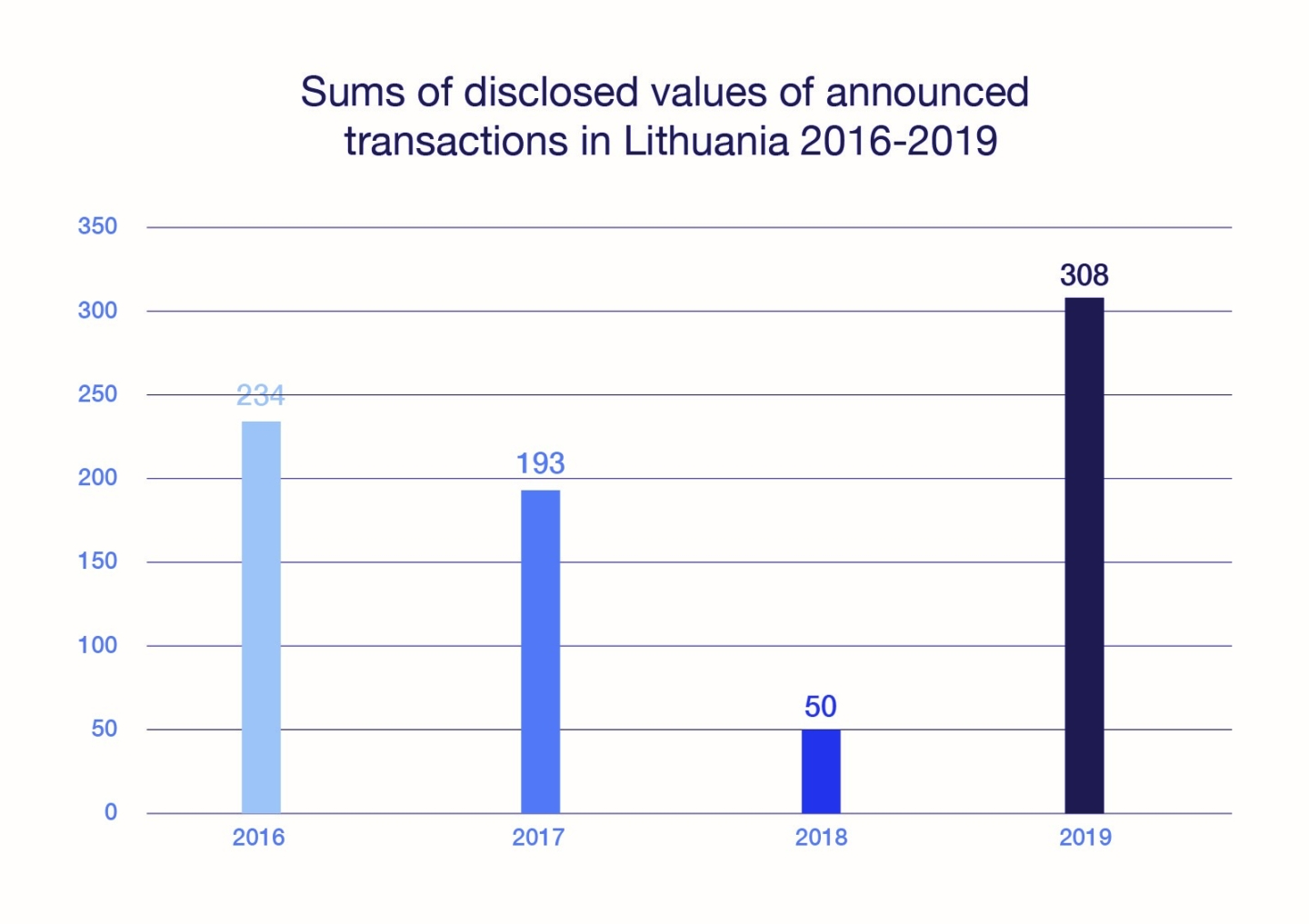 *We note that Mergermarket statistics include only values that were disclosed by deal parties to Mergermarket or publicly, thus the numbers in the table may not fully reflect the actual size of the M&A market in Estonia, Latvia and Lithuania and indicate only general tendencies.

Most active sectors. The transaction with the highest disclosed value in 2019 was yet again in the banking sector – acquisition of the private loans unit of Danske Bank’s Estonian Branch by LHV Pank for EUR 410 million. However, the highest number of announced transactions was in the sectors of TMT (16) and Industrials, Construction and Manufacturing (13), the latter also being the most active globally in M&A last year. The Financial Services sector stayed in third place with 8 announced transactions, the Transportation sector came fourth with 7 announced transactions while Energy and Utilities as well as Trade and Consumer Goods had 6 announced transactions each. The fact that the TMT sector is leading in M&A in the Baltics also reflects trends in the wider region, as TMT was No 1 by value in terms of M&A deals in the CEE region in 2019 as well. While most M&A transactions in Europe (and the second-highest number globally) in 2019 were in the Pharmaceuticals sector, the Baltics saw only three of them in 2019 – two in Estonia and one in Lithuania.

Outlook for 2020 appears pretty positive. Most dealmakers are talking about promising deal pipelines, Baltic PE funds have ready-to-use gunpowder, sellers’ and buyers’ expectations are balancing out and the number of Baltic “first-wave” businessmen thinking about succession planning is growing every day. Of course, it’s difficult to forecast which sectors will be most active this year, but currently TMT and Energy appear the most likely.

As we forecast last year, PE and Venture Capital (VC) players again significantly contributed to the M&A deal count in 2019. Financial investors participated in three out of the Top 5 deals by disclosed value in the Baltics. Two of these were VC investments in new Baltic unicorns, whereas the largest PE transaction ‒ the acquisition of Baltic Classifieds Group by Apax Partners ‒ was one of the three biggest M&A transactions in the Baltics in 2019.

The Baltic PE scene could probably be best described by the word “balanced”. While none of the funds were too active dealwise, many of them made notable transactions, eg just before the end of the year BaltCap Private Equity Fund III announced its acquisition of Krekenavos Agrofirma, one of the biggest meat processing companies in Lithuania, INVL Baltic Sea Growth Fund acquired Montuotojas (but their likely more ambitious attempted investment in Grigeo’s cardboard manufacturing business was terminated just before closing), Livonia Partners made several acquisitions in Estonia (Klaasimeister and Fenestra) and their portfolio companies made several add-on acquisitions in Finland, while LitCapital made two successful exits from Baltik Vairas and Medicinos Paslaugų Grupė.

In addition to dealmaking, local PE funds are becoming bigger with each new fund cycle. Just a few years ago the biggest Baltic PE funds were in the region of EUR 60-80 million. In 2019 newly raised funds of both INVL and BaltCap exceeded the EUR 100 million mark and, knowing that they have not yet been closed, we expect that final closings will be somewhat closer to the EUR 200 million mark (BaltCap Private Equity Fund III first closing was at EUR 126 million and Baltic Sea Growth Fund interim closing was at EUR 142 million). Both of these funds have already completed their first transactions in 2019. With their growing size local PE funds will be able to participate in bigger transactions and compete for local champions in many business sectors. At the same time the size of new funds means that local financial investors are closing the gap between small deals (that have already been covered by local financial investors for some time) and larger transactions that are of interest for international PE houses.

As regards the VC market, this was really active in 2019 and there are a number of notable topics. First, a larger number of new local Baltic VC funds actively started their investments or gained momentum after their establishment in 2018. One could say that for the first time local startups in the Baltics have a possibility to choose from different local funds and VC money is readily available for startups in various industries. Business angels networks and pre-seed accelerators (like Startup Wise Guys and 70Ventures in Lithuania) are also contributing to the development and growth of the startup ecosystem (in Lithuania these are supported by Invega’s Co-Investment Fund). Further, Lithuania has joined Estonia in the exclusive unicorn club – a EUR 128 million investment in Vinted led by Lightspeed Venture Partners made Vinted the very first Lithuanian unicorn. Lastly, it should also be noted that NordicNinja VC, the first VC fund managed by Baltic fund managers focusing on the wider Nordic region, has started its investment activities and those activities are not only outside the Baltics.

Looking into the future it seems that growing local PE players with significant amounts of available capital and international financial investors will be ever more important to the Baltic M&A market. The VC scene also looks very positive and we see an increasing number of startups mature enough for larger investments – Series A and further funding rounds.

The table below lists the Top 5 deals in the Baltics by disclosed value. 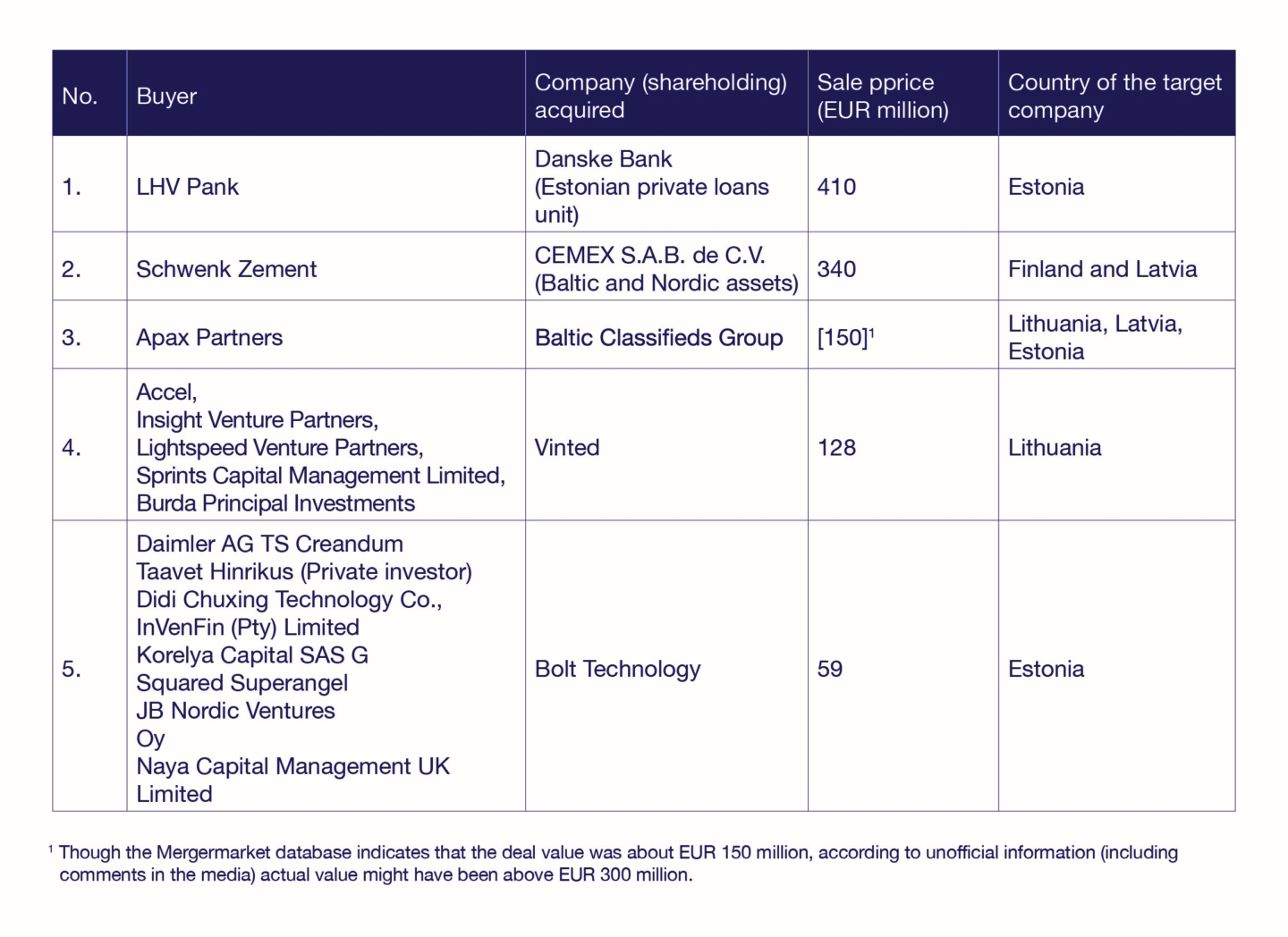 *This summary has been prepared on the basis of publicly available data and Mergermarket data.

Overview of the Belarusian M&A and PE market in 2019

The Belarusian M&A and PE market in 2019 continued the trend of 2018 – remaining moderately active in the light of overall modest growth of the local economy. The IT sector, which has been forging the most prominent deals for several recent years, remained one of the main newsmakers and had the largest number of deals, in particular in the games development industry. This expected activity was complemented by M&A bustle in retail, manufacturing and food production.

Based on a rough estimate by Uniter investment company, the total value of M&A deals in Belarus during 2019 exceeded EUR 300 million ‒ approximately EUR 27 million less than in 2018. At the same time, the number of deals increased twofold – up to 40 ‒ with a respective decrease in average transaction. Even though the lower general maturity of the Belarusian market and smaller level of disclosure do not allow full assessment of the real numbers and values of transactions, we are observing further evolution of the M&A market in Belarus and growing potential for future projects.

In 2019 no new local PE/VC funds appeared in the Belarus market, whereas local individual investors, incubators and small investment companies became more active in selecting and financing early stage startups. As in previous years, Belarusian startups continue their focus on foreign markets and attracting investment from foreign funds, so that a significant portion of transactions are still structured abroad.

What will the future bring? 2020 might be a less active period in M&A due to an expected slowdown in economic growth and the Presidential election, as well as the unclear future of the Russia-Belarus integration process. We may see new startup exits and market entries in IT involving major global players, possibly also local VC funds being established in Belarus thanks to updates in the relevant legal framework. We would also place a bet on some relatively new sectors that up to this moment have not demonstrated their full potential ‒ such as finance, pharma, and high-tech manufacturing. With local private business groups having matured and become acquisitive, we will likely see some interesting domestic M&A deals as well.

The most remarkable deals in or involving Belarus: 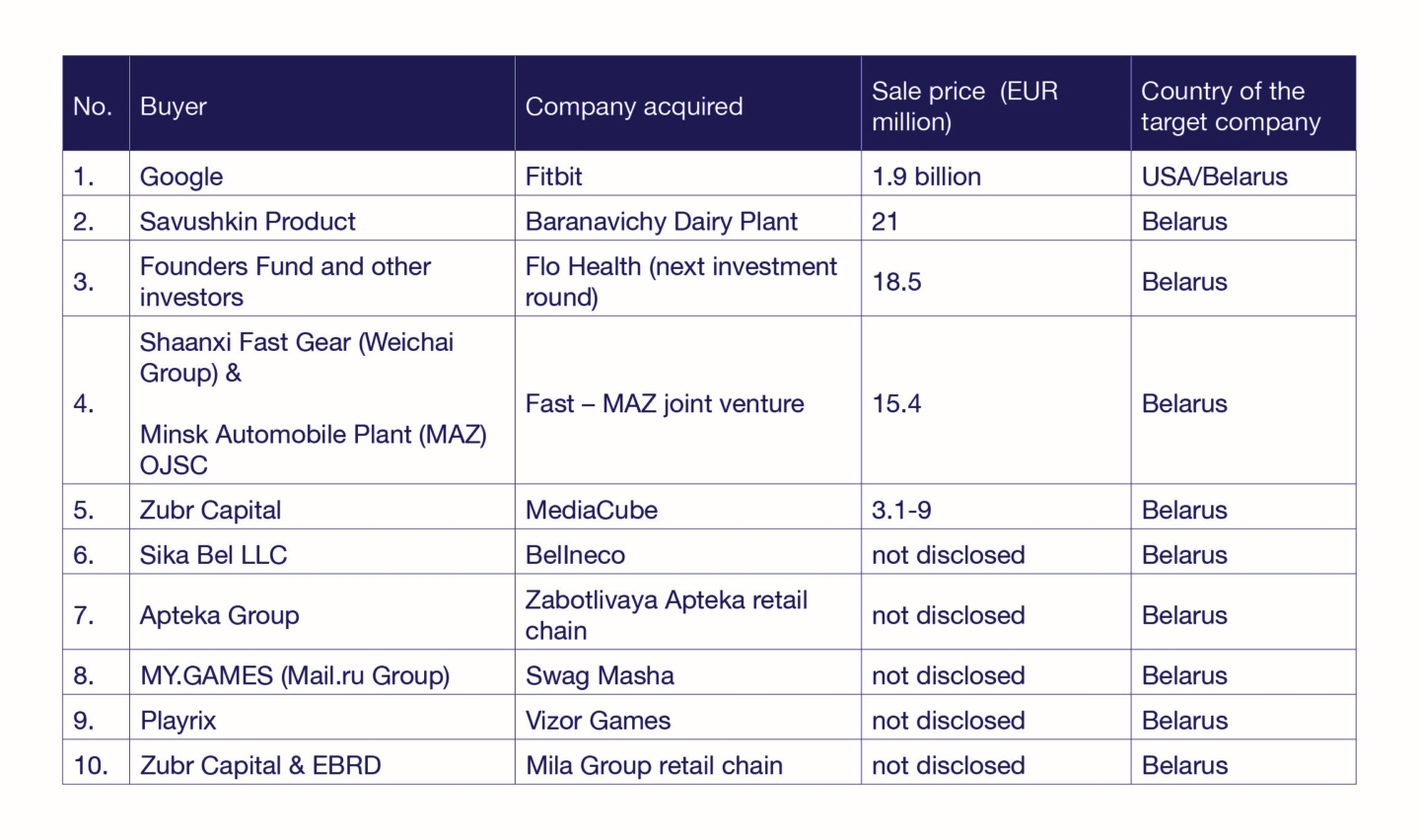