2020 was not a usual year, and you may be wondering how it affected the M&A market in our region. With the onset of the first wave of the pandemic in the spring, many were forecasting the M&A market to slow down significantly. The good news is that in our region the annual number of transactions and their total disclosed value ended up at similar levels as in 2019. This result is largely thanks to a strong boost from the region’s thriving startup sector – as many as five of top 10 Baltic deals by value have involved investments in or acquisitions of startups. And on top of that Pipedrive became Estonia’s fifth unicorn!

In this newsflash our Corporate and M&A team takes a closer look at the main Baltic M&A and private equity market trends and shifts over the last year, and attempt to forecast what this year may bring.

Main trends in the Baltic M&A market in 2020

During the first wave some transactions were delayed (though not many were completely cancelled), but at the end of the year the deal market was very active, as both previously delayed transactions and new ones were being closed (see the table below). We actually joked that we had a “double wave” in the M&A market at the end of the year. We are glad that both companies and transaction consultants have quickly adapted to working remotely, and have been successfully negotiating during video meetings and signing and closing transactions online.

It should also be noted that compared to 2019, in 2020 there were a greater number of larger transactions – we saw six transactions with a disclosed value of over EUR 100 million (in 2019 there were four such transactions).

Number and total disclosed value[1] of announced M&A transactions[2] in the Baltics (Lithuania, Latvia and Estonia) in 2017–2020 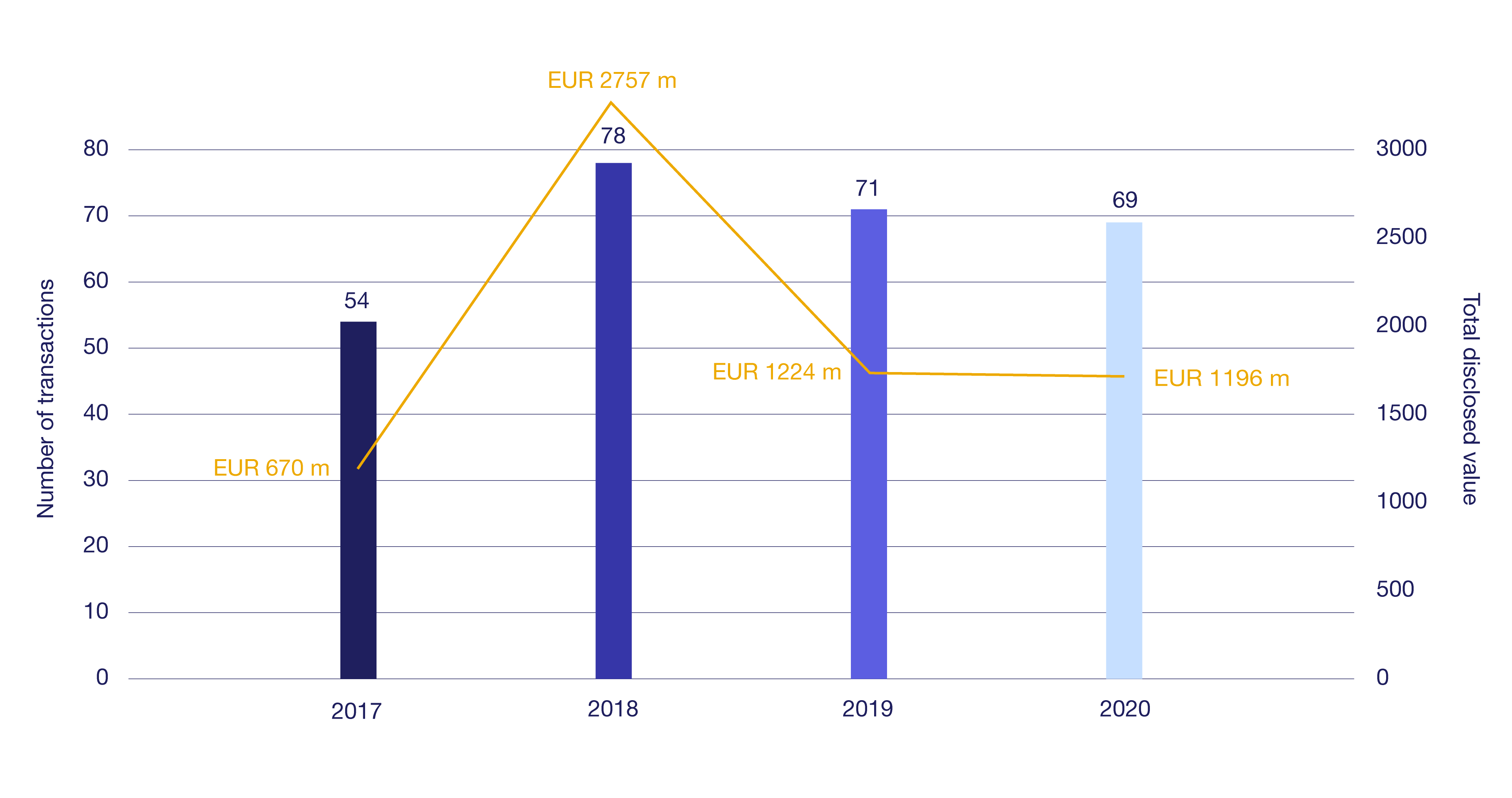 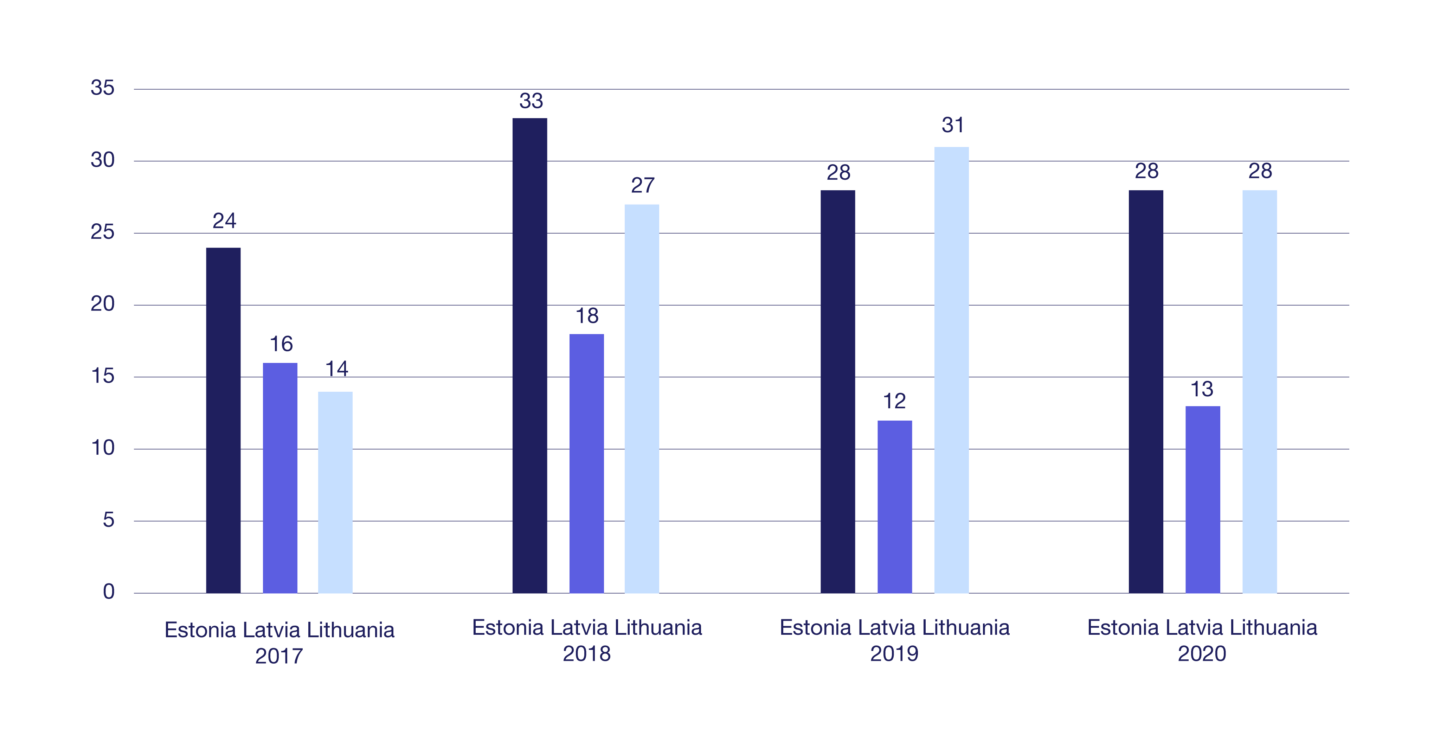 Sum of disclosed value of announced transactions in Estonia, 2017–2020

Sum of disclosed value of announced transactions in Latvia, 2017–2020

Sum of disclosed value of announced transactions in Lithuania, 2017–2020 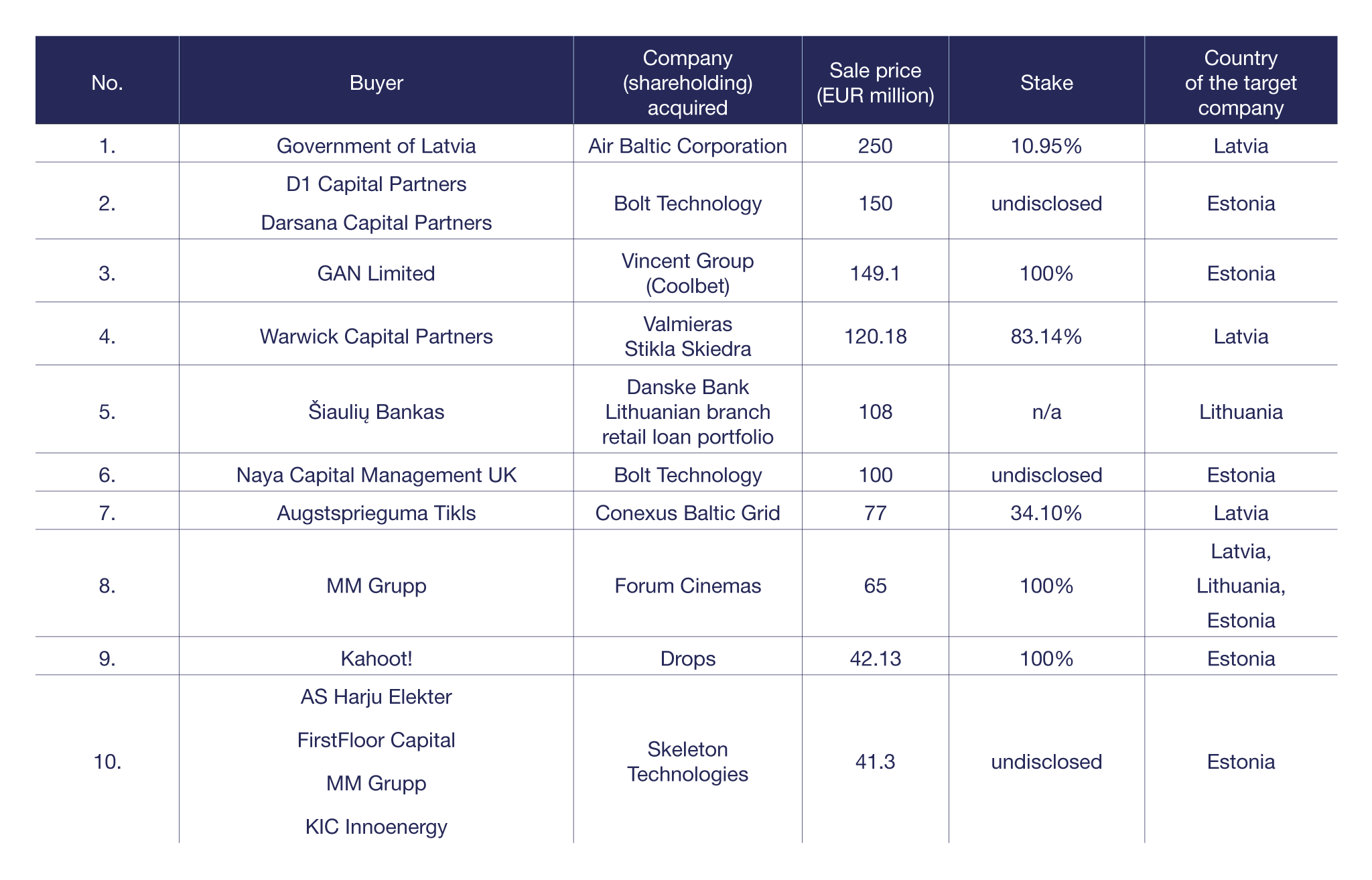 The pandemic has accelerated the trend towards the digitalisation of businesses and investment in technology, with the TMT (Technology, Media and Telecommunications) sector being the most active in terms of transactions worldwide in 2020. According to Mergermarket statistics, global M&A transactions in the TMT sector jumped by as much as 56.8% in value (from USD 543.4 billion in 2019 to USD 851.8 billion in 2020).

The trend in the Baltics was similar – the TMT sector saw the largest number of transactions (16 transactions) and as many as four of them were among the top 10 transactions by disclosed value in 2020 (No. 2, 3, 6 and 9 in the top 10 deals shown above). We note that the sale of Forum Cinemas (the largest cinema chain in the Baltics, No. 8) could be considered to be a TMT sector transaction; however, Mergermarket classifies it in the leisure sector. Second place (with seven transactions each) is shared by four sectors – agriculture; construction and production; consumer goods and services; and industrial products and services. Being aware of both the continuing focus on TMT globally and the strength of the Baltic startup ecosystem, we forecast that the TMT sector will be highly active this year as well. 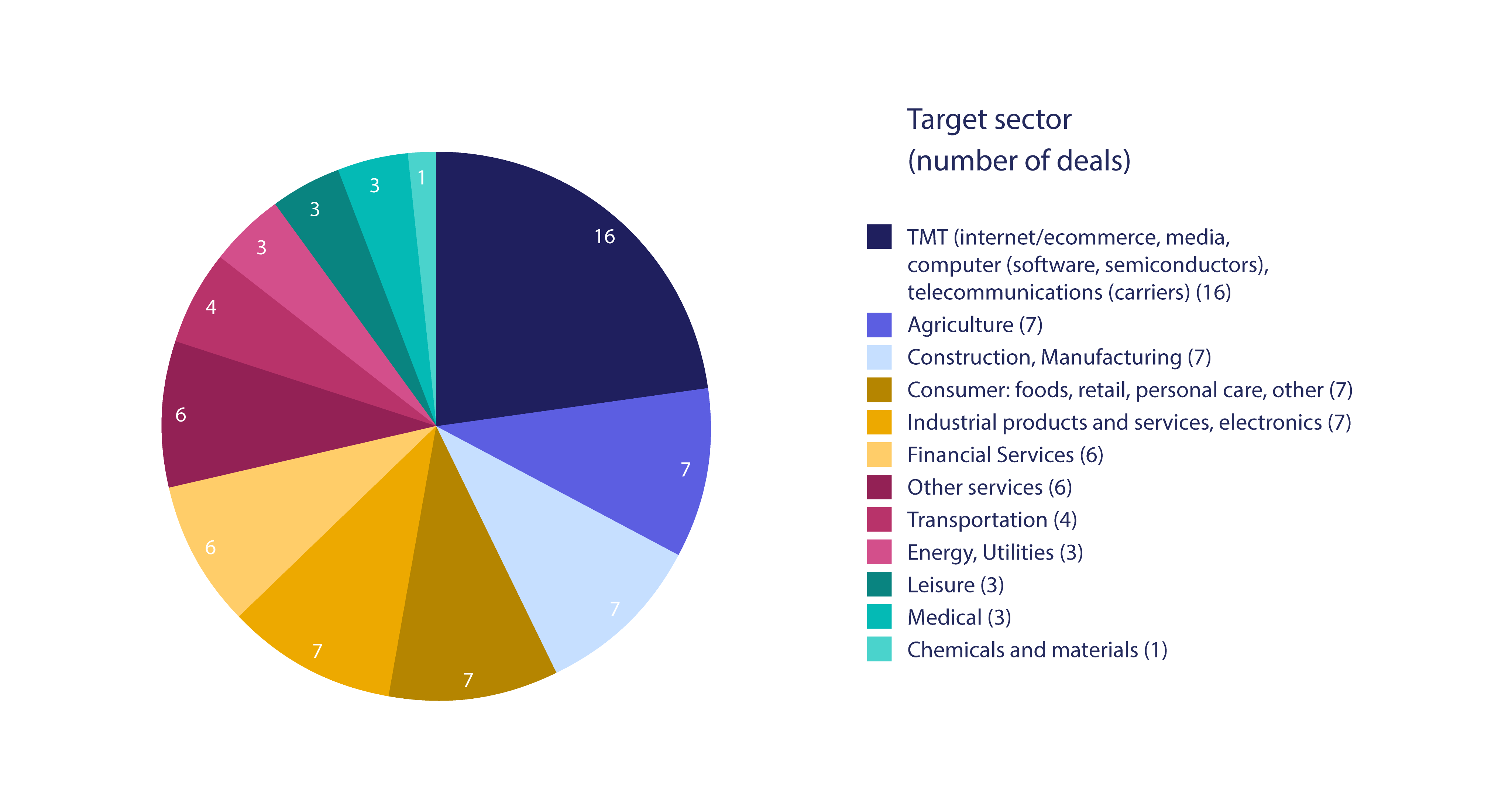 Record boost from the thriving startup sector! One important point is that 2020 stood out for the record number of investments in Baltic startups. It is the first time to date that as many as five of the top 10 deals by value have involved investments in or acquisitions of startups (Bolt (twice), Coolbet, Drops, Skeleton Technologies). On top of that, in November the Estonian startup Pipedrive received an investment valuing it at USD 1.5 billion, making it Estonia’s fifth unicorn! Let us also remind you that a year ago, in November 2019, Vinted became the first unicorn in Lithuania. We previously forecasted that the Baltic startup ecosystem would gradually start fuelling the Baltic M&A market and its TMT sector. We were wrong about the speed – this thriving sector is already giving a strong boost to the M&A market!

Regional private equity (PE) funds have also been active, and the pandemic has not dampened their willingness to invest. Although none of their deals are among the top ten largest transactions by disclosed value, they have closed remarkable deals that may have broken into the top 10 if their value had been disclosed. What’s more, the size of the largest regional players (primarily BaltCap and INVL funds) allows them to invest in companies valued at EUR 100 million and more, meaning that they can compete for almost all deals on the Baltic market – and that is what they do. In addition to that, the largest private equity houses have not only sufficient size and available funds, but also ticking investment periods, and so we can expect more and even bigger deals from local PE funds in the coming years.

Even if we disregard the largest deals, the venture capital and startup ecosystem in the Baltics has continued to grow successfully. Venture capital funds established 3–4 years ago are gaining momentum and are increasingly often making larger additional investments in their portfolio companies, while also attracting co-investors from abroad or cooperating regionally. At the same time there is still room for new venture capital funds, as evidenced by the launch of LongeVC in Latvia.

Overview of the Belarusian M&A and PE market in 2020

In 2020, the Belarusian M&A market became a law unto itself more than ever before. The effects of the pandemic were overshadowed by the severe political crisis triggered by the presidential election in August, which quickly changed the conditions for both international and domestic businesses operating in the country. Since July, direct cross-border acquisitions and investments have come to an almost complete halt. Some deals that were cancelled were just a few steps away from completion.

With the current political turmoil showing no signs of quick resolution and the COVID-19 epidemic still posing a serious threat to the population and economy, the outlook for M&A in 2021 is rather gloomy. We are likely to see some small- and mid-scale local restructurings and acquisitions, some distressed sales and maybe market exits, as well as local assets in various industries, most of all Tech (and especially game development), becoming elements of global M&A deals. 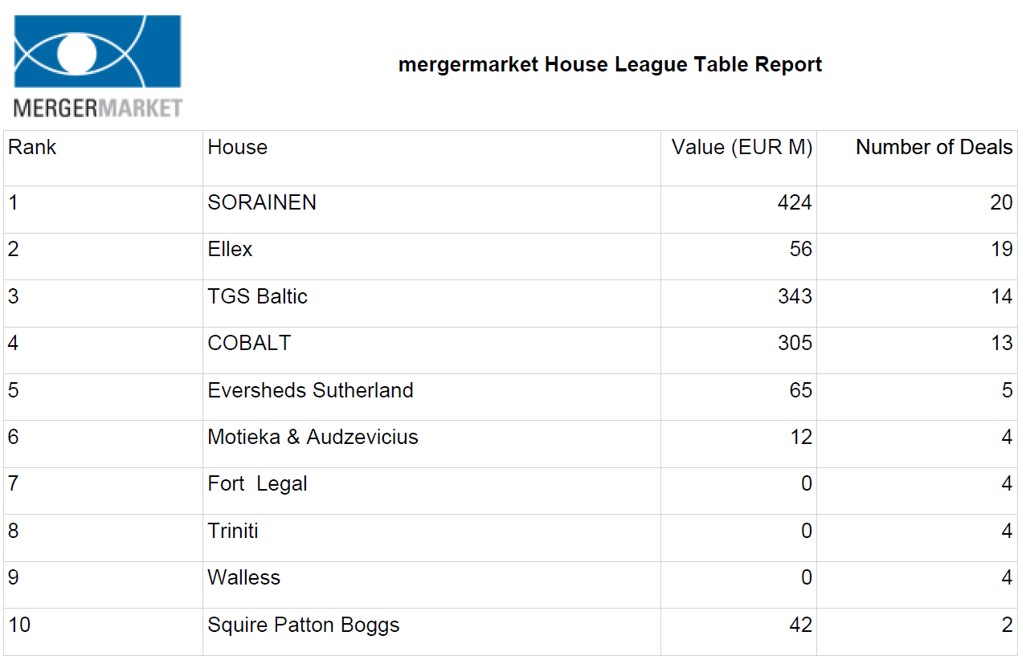 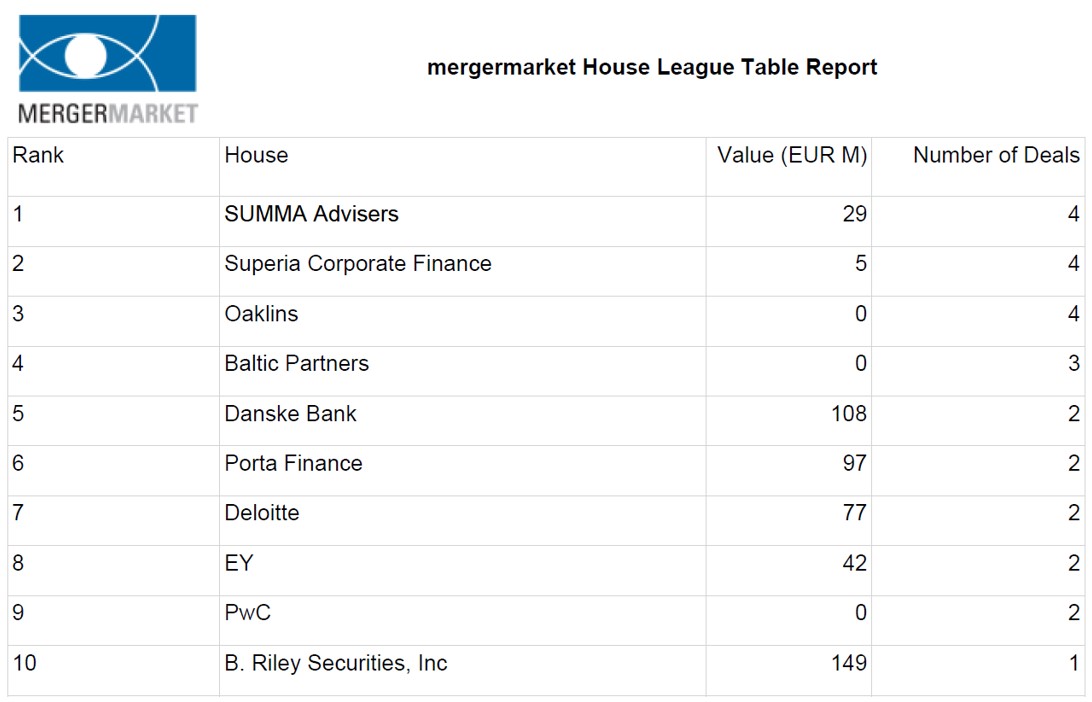 [1] We note that Mergermarket statistics include only values that were disclosed by deal parties to Mergermarket or publicly, thus the numbers in the table may not fully reflect the actual size of the M&A market in the Baltics and indicate general tendencies.

[2] Mergermarket statistics include only higher value transactions (normally exceeding USD 5 million) and do not reflect smaller transactions. Transactions have been assigned to countries based on the “deal dominant geography” criteria in the Mergermarket database.

[3] This table has been prepared based on the information in the Mergermarket transaction database and publicly available data.