In the first half of this year, 54 transactions were announced in the Baltic M&A market, with a total value of EUR 1 billion, according to Mergermarket, indicating that levels of activity are healthy*. “It’s a myth that the region’s M&A market has cooled down as scared investors stay away,” concludes Laimonas Skibarka, managing partner at Sorainen.

Indeed, deal activity is down from the first six months of last year, when a total of 69 deals were completed, with a total value of EUR 1.5 billion. Yet, just a year earlier, in 2020, the first six months saw no more than 36 deals taking place, reaching just half of this year’s combined deal value. 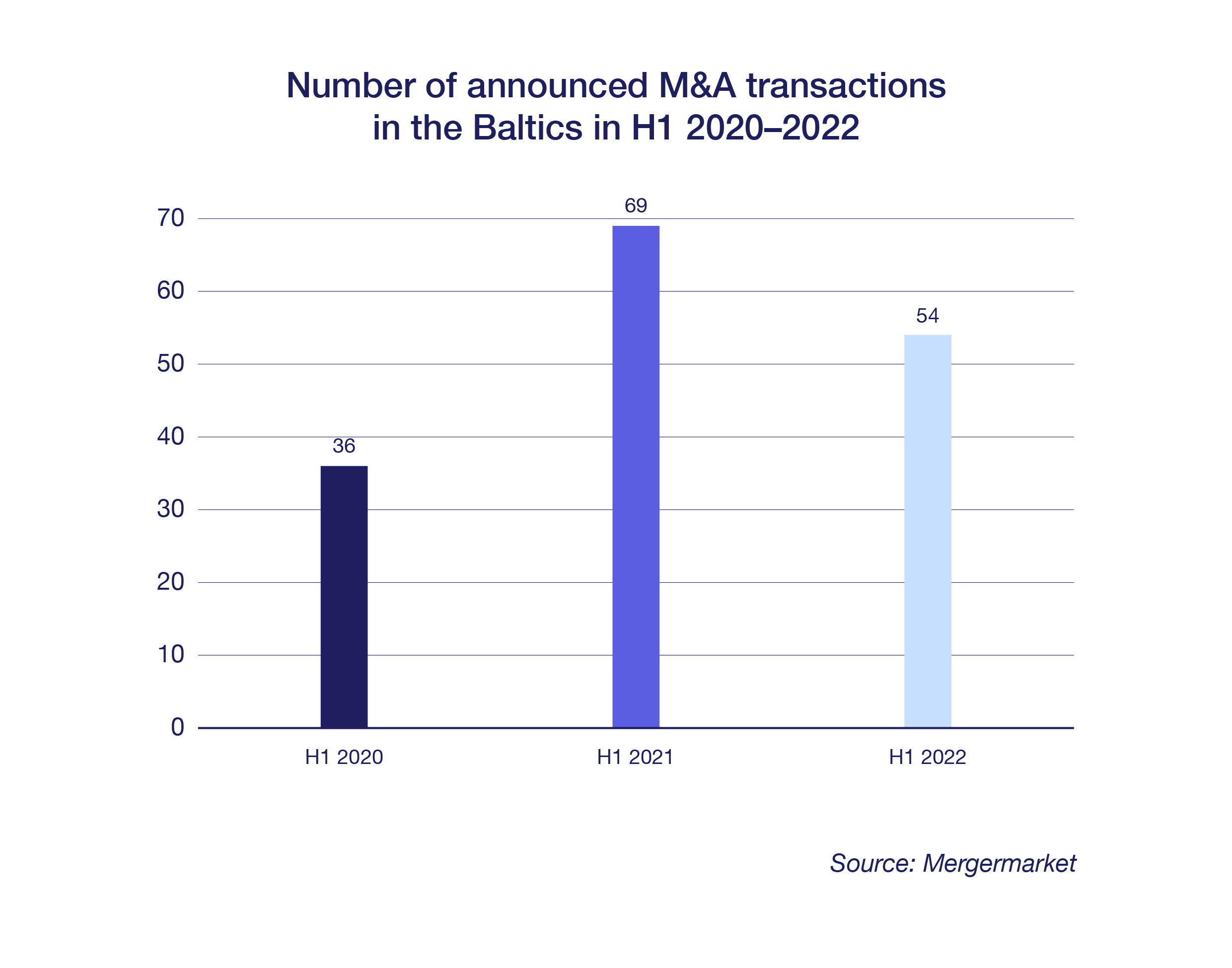 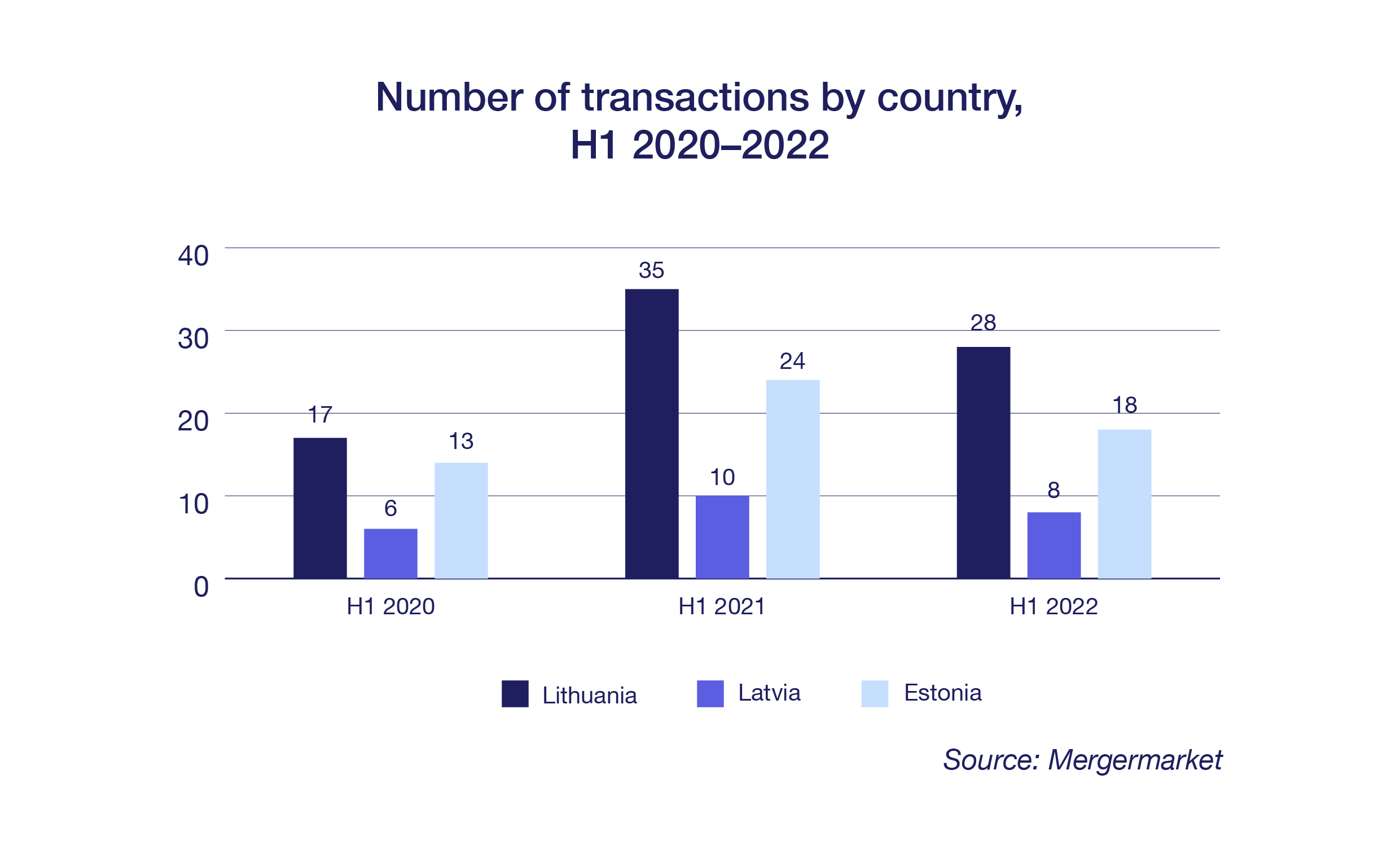 The conclusion? Just as predicted at the Baltic M&A and Private Equity Forum in April, the war in Ukraine has had repercussions, primarily affecting valuations and increasing inflation pressures, but overall it has failed to harm the Baltic investment and transaction.

“We hear from clients and market players that some international funds have paused their activities and are waiting to see how the markets and the macroeconomic situation will change, expecting a potential recession will come. Others continue investing, but are negotiating for lower valuations of startups or otherwise trying to improve the terms of deals,” says Skibarka.

He comments that this year activity was higher in the first quarter, but it slowed down a bit in the second quarter – both because of the war in Ukraine and because of concerning macroeconomic trends. “However, deals keep taking place and we can expect that the total annual result, although not a record year, will still exceed 2019 and 2020 levels,” says Skibarka. 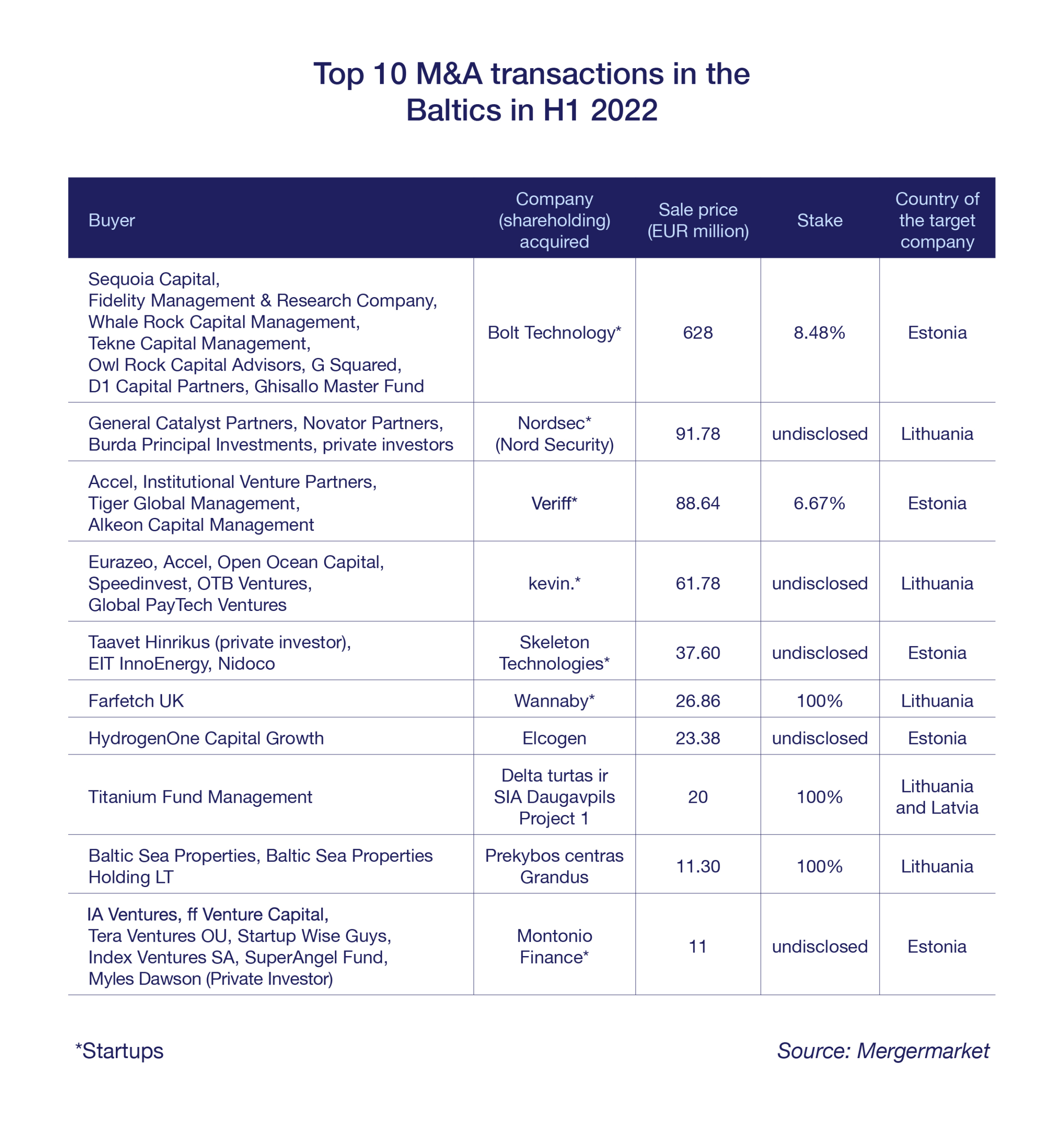 Sorainen partner Paul Künnap emphasises that last year was nothing short of cosmic, so it would be hard to beat under any circumstances. The moment of truth should arrive in the autumn, he says. “While there is reason for concern, let’s face it: in the market there is an immense volume of money, which needs a place to go. Funds are looking for an objective, and in this inflationary environment buying expensively is smarter than letting funds burn,” Künnap adds, predicting that there will not be a slowdown.

The assumption that Baltics have kept their attractive image among foreign investors despite the war is corroborated by Mergermarket data. The proportion of transactions in which buyers or investors were from outside the Baltic states has in fact increased year on year, with half of the acquisitions now made by foreign investors. 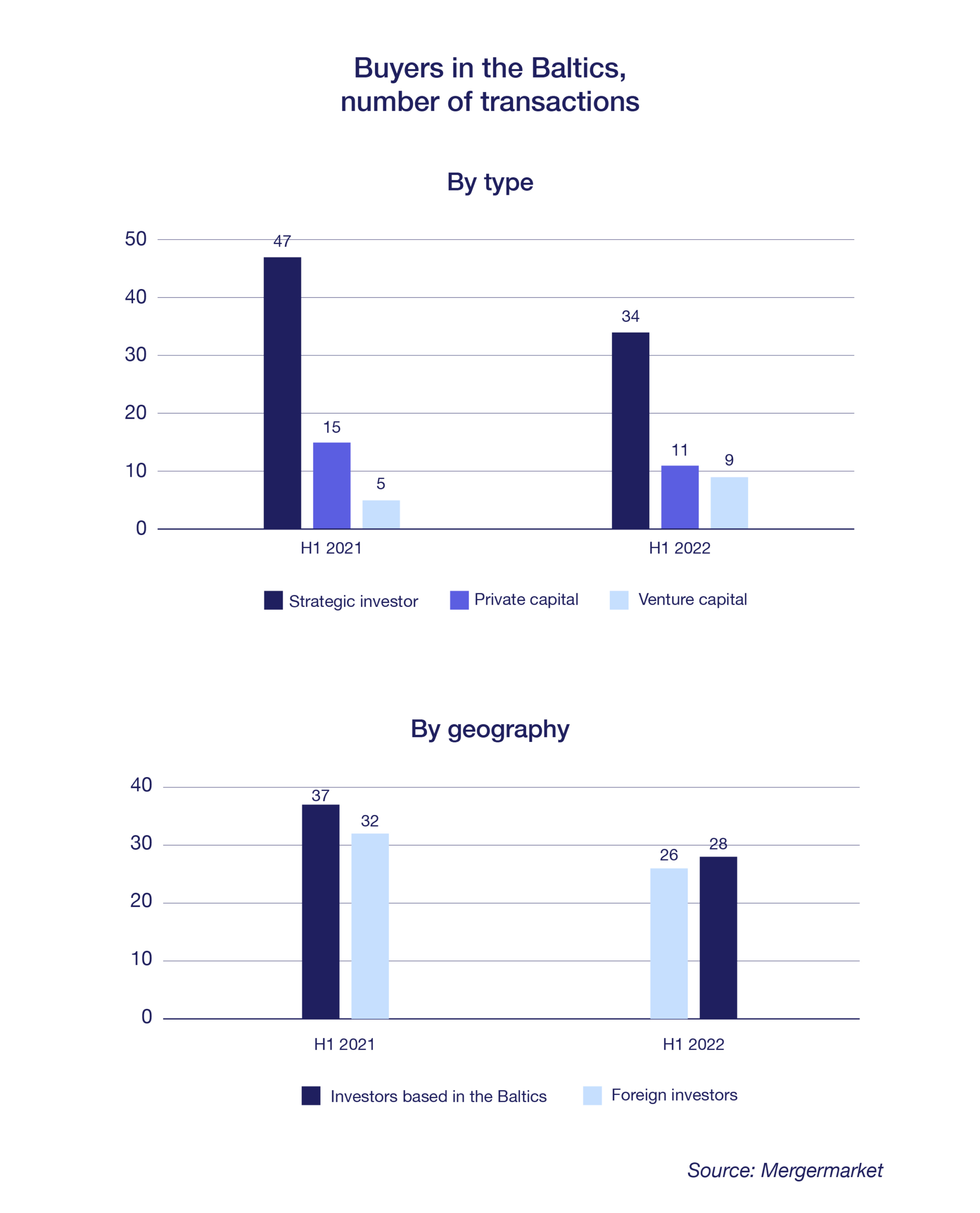 The overall cooling thus reflects global trends. Global dealmaking dropped by nearly a quarter during the first six months of 2022, according to Mergermarket. The value of M&A deals fell 23% in the first half of 2022, while the number of transactions dropped 20%.

Europe, however, saw a rebound in the second quarter, with M&A value rising 24% sequentially. “M&A had already dropped more in Europe than in other regions earlier this year following Russia’s invasion of Ukraine in February,” the Mergermarket analysis concludes.

By sectors, startups are dominating the picture, with Bolt’s EUR 628 million funding round topping the charts and Estonian startups attracting investors in jaw-dropping volumes. Of the ten largest deals in the first half of the year by disclosed values, seven were announced for startups, while six of the largest deals were also transactions with startups. Startup fundraising was very active in the first quarter and the Estonian fundraising volume alone reached the record EUR 1 billion by April. Although fundraising was not impacted by the war in Ukraine or the geopolitical situation, the activity slowed down considerably by the second quarter due to the huge decline in global stock markets. This will likely impact the fundraising deal activity until the end of this year.

However, as venture capital funds have reduced investments in startups globally, this trend may be slowing down and larger funding rounds may become scarce. “The tech companies, who can, will postpone their financing rounds, decrease burnout rates, increase runway and focus on bridge rounds rather than major VC rounds,” commented Toomas Prangli, the head of Corporate and M&A practice group and Startup sector group at Sorainen. 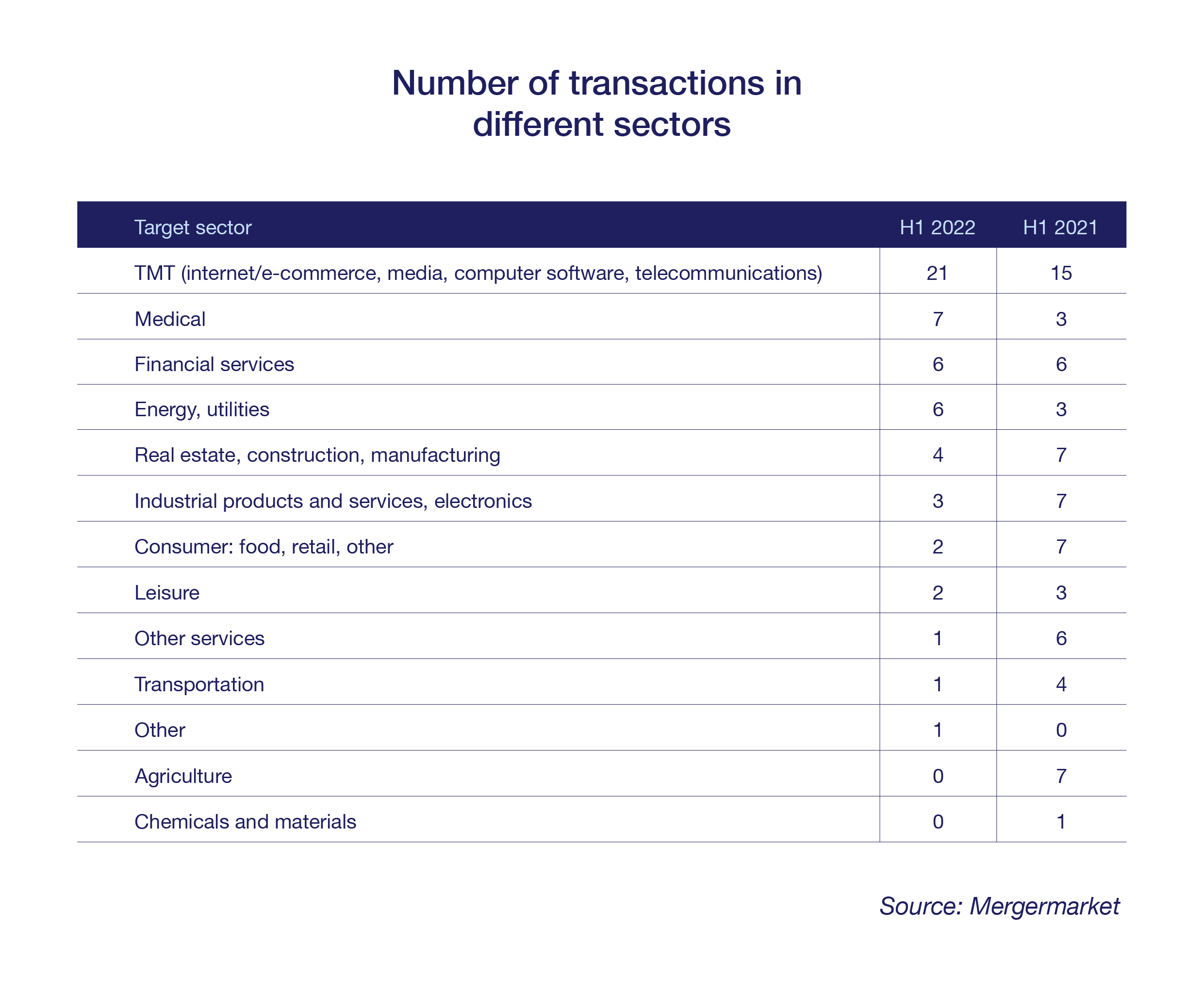 Other active sectors were healthcare, energy and financial services, followed by real estate. Paul Künnap commented on the real estate sector that the future will likely see transactions with residential portfolios rather than with classic commercial properties. 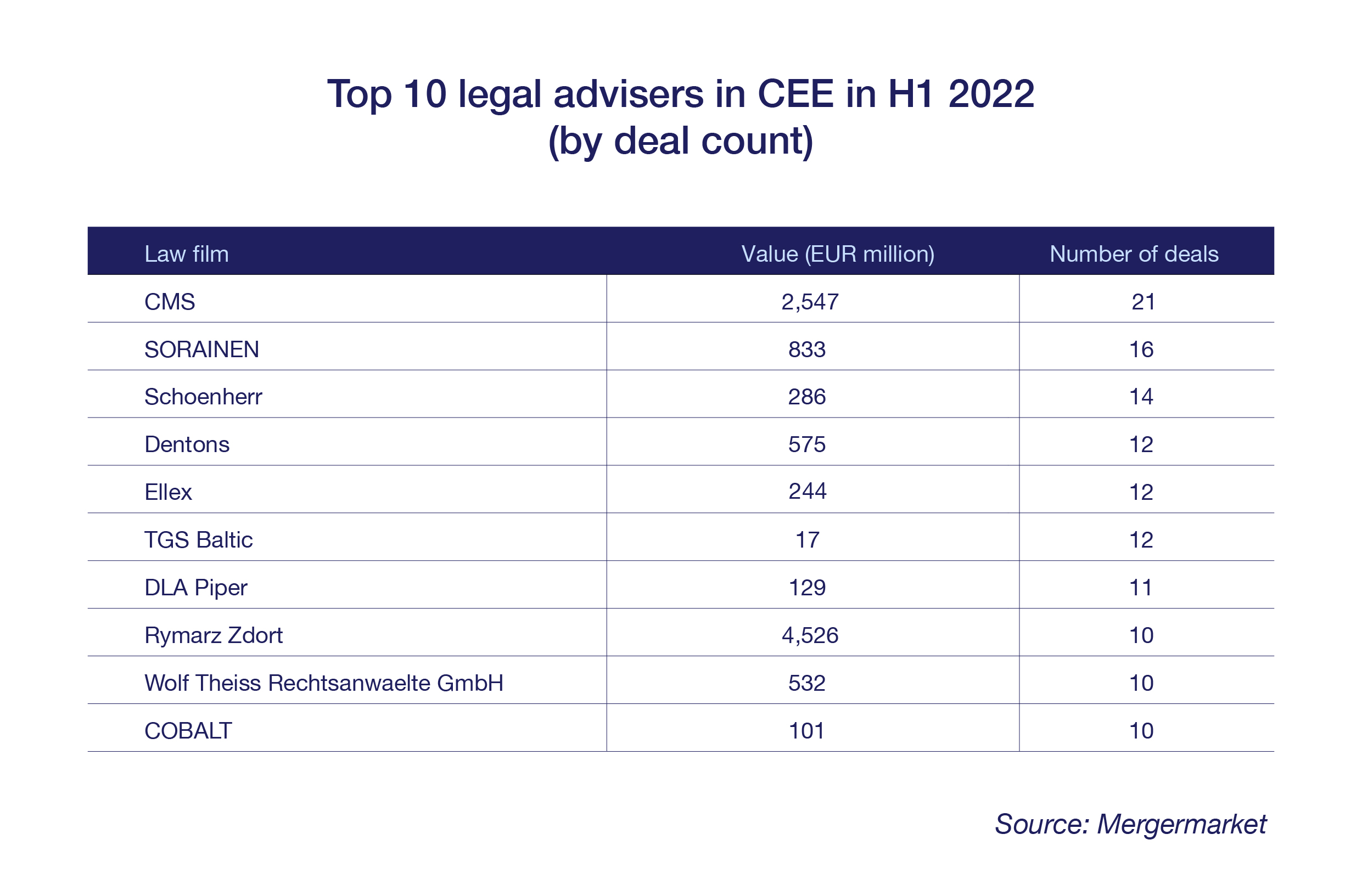 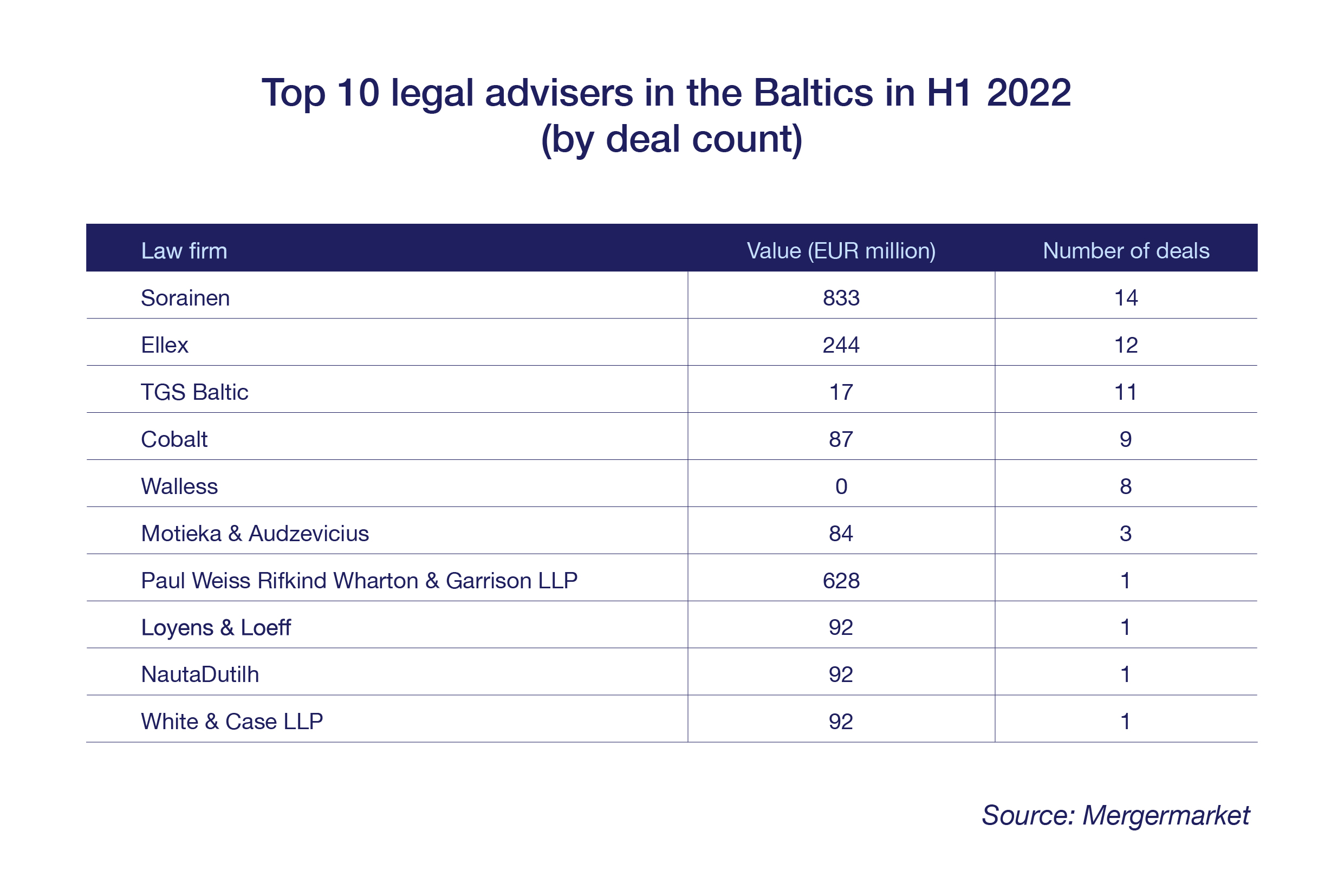 *Source info: Mergermarket. We note that Mergermarket statistics only include values that have been disclosed by deal parties to Mergermarket or publicly, and also include only higher-value transactions (normally those exceeding USD 5 million), and thus the numbers in the table do not fully reflect the actual size of the M&A market in the Baltics but indicate only general tendencies.