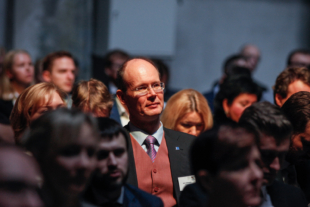 “Always stay curious about the world, remain enthusiastic about what you do, and eagerly teach yourself about the new things you come in contact with,” Aku Sorainen, who was recently elected to the trio of best Estonian top executives, cited the recipe for keeping his mind fresh and growing together with his namesake company.

On Friday, 17 May, the Estonian Leader of the Year 2019 will be announced at Pärnu Leadership Conference. The nominees are Aku Sorainen, Coop Estonia’s CEO Jaanus Vihand and Magnetic MRO’s CEO Risto Mäeots, all well-known and highly respected leaders.

The winner will be the most exemplary top executive who contributes to society at large besides steering the helm of their own organisation. According to the Estonian business daily Äripäev, a record number of 180 Estonian top leaders were named as candidates for the title by the general public. An independent jury, who was also welcome to add names to the list, then selected the three best executives.

The competition is organised by the Estonian Employers’ Confederation, the Estonian Human Resource Management Association PARE, the newspapers Postimees and Äripäev, Pärnu Conferences and Luminor Bank. The jury will consider three criteria: the company’s long-term economic success, the leader’s ethical conduct and sense of responsibility, as well as the contribution the leader has made to the country.

The story of law firm Sorainen began in 1991 when Aku, inspired by the newly regained independence of the Baltic states and then a student at the University of Lapland, chose to write his master’s thesis about business legislation in the Baltic states.

When Aku graduated in 1993, his thesis “A Foreign Investor in the Baltics” was published in book format. Many of the corporations who had sponsored his thesis started seeking his advice on doing business in the Baltics. Aku decided to move to Estonia and start practising law. In 1995, he established the law firm Sorainen in Tallinn, while already setting sights on establishing a pan-Baltic legal powerhouse.

“I was a lawyer first and entrepreneur second,” said Aku about moving towards his goal. “Managing a company was a way to fulfil a vision, not a goal in itself. The vision of my endeavour was to create a law firm which would cover the Baltic states and Belarus. To do that, I had to begin to manage, to lead.”

Today, this original vision has been fulfilled and the next step is to improve, raise quality and strive for greater success in a way that staff, clients and shareholders would all be truly happy about.

The best person to get something done is a busy person. Besides building up the company, Aku serves as honorary consul of the Republic of Malta. A few years ago, Aku was awarded the Knight’s Cross, First Class, of the Order of the Lion of Finland by the president of Finland for two decades of work in developing relations between Estonia and Finland and for supporting Finnish businesses in the Baltics and Belarus. At the beginning of this year, a temporary weapons exhibition “From War to War”, based on Aku Sorainen’s private collection, and which outlines the evolution of firearms in the first half of the 20th century, opened at the Estonian War Museum.