Our team share another piece of intellectual property (IP) news in the Belarus-Baltics region telling about curious cases, news in legislation, and some measures taken by governments due to the COVID-19 pandemic which may still be helpful to business (mainly extension of statutory deadlines and, in some cases, waiver of statutory duties).

The World Intellectual Property Organisation (WIPO) launched the new WIPO PROOF online-service on 27 May 2020. The purpose of this service is to provide a date- and time-stamped digital fingerprint of any file, proving its existence at a specific point in time.

Because of the increasing digitalisation of the modern world, different digital files containing valuable information may become the result of inventive and creative activity. Such data may be subject to different kinds of infringement. WIPO PROOF is intended to assist with so-called “certification of information authorship” by issuing tokens (“confirmation certificates”).

As to copyright, it is important to mention that this occurs from the moment of creating a work. Still WIPO PROOF tokens serve as proper evidence during court proceedings to establish the object, date and time of copyright occurrence.

You can find more information about WIPO PROOF service here.

Amendments to the Law on Copyright introducing open licence, limiting number of reproductions of a work

On 27 May 2020 the Law of the Republic of Belarus “On Copyright and Neighbouring Rights” was amended. The amendments include the following:

Unfair competition and trademarks: battle for “Marseille” and controversy over a popular carbonated drink brand

The case goes as follows:

As a result, the antimonopoly authority (a) found the actions by Company B and Company C related to Trademark registration, opening a café & sending out a cease and desist letter as using an exclusive Trademark right in order to gain an advantage in entrepreneurial activity and (b) declared these actions to be unfair competition.

Later the dispute was settled amicably between the parties. Company A declined to bring Company B and Company C to administrative liability.

The competent authority declared selling the carbonated drink “MAQUA Snezhok” by Company D to be unfair competition. The label “MAQUA Snezhok” contained the word “Snezhok”, which was qualified as confusingly similar with the trademark “Snezhok” registered in the name of Company E. Company E also used its trademark on drink labels. See the pictures of the two opposing drinks below. 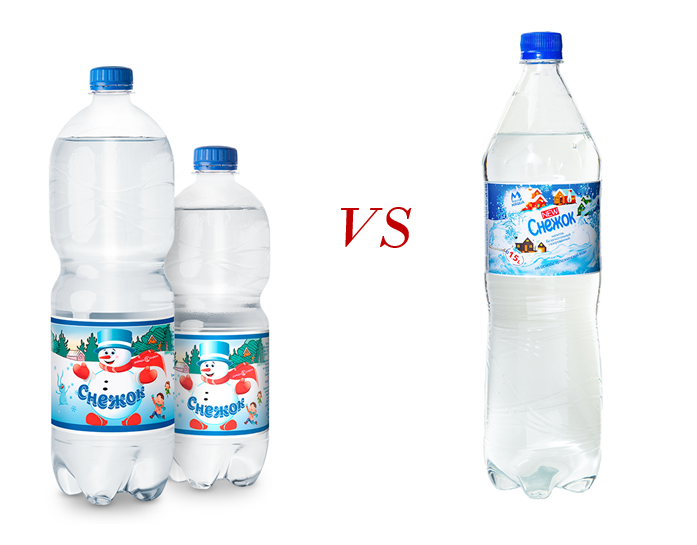 Company E (with registered trademark) on the left , Company D (unfair competitor) on the right

Similarly to the first case, the dispute was settled amicably between the parties. Company E abandoned its claim to hold Company D to administrative liability.

The IP-related COVID measure in Belarus concerns renewal of patents and trademarks. If the validity of a patent for an invention, utility model, industrial design, plant variety or trademark registration expires from 30 April 2020 to 31 July 2020, the period is automatically extended for another three months. After expiration of these three months it is still necessary to apply for renewal and pay the state fee.

What does Brexit mean for EU trademarks and ongoing proceedings?

As from the withdrawal day, UK rights will cease to be earlier rights and any opposition or invalidity request that is based solely on a UK right is expected to be automatically dismissed in EUIPO proceedings.

Daimler AG has successfully defended its community design rights for its alloy wheel rims against infringement in Estonian courts. The defendant, a spare parts seller who imported and sold copies of the wheels in Estonia, relied on the repair clause of the Regulation on Community Designs and claimed the wheels constitute a component part of a complex product used for the purpose of repair of the car so as to restore its original appearance. The court ruled in favour of Daimler referring to ECJ Acacia joined cases C-397/16 and C-435/16. The court explained that the sale of a set of four wheels is upgrading, not repairing, a vehicle, and that the defendant had not fulfilled the duty of diligence as regards compliance by downstream users with the conditions laid down in the repair clause.

The case outlines how companies can protect its IP rights by turning to the Estonian Tax and Customs Board and successfully preventing counterfeit copies being imported and marketed in Estonia. Our team of experts can help companies  apply to the customs administration to take action on products counterfeiting their IP rights.

For years now, it has been possible to register short audio and video clips as trademarks in addition to the traditional word and figurative marks in the EU. But Estonian companies have just recently started finding the “voice” or “tone” of their brand with Olerex announcing a competition for its new audio logo.

Registration of new types of mark has been made easier by the elimination of the graphic representation requirement in the EU Trademark Regulation. For example, sound and multimedia signs, i.e video clips, can now be easily registered as trademarks. There are still several requirements which the representation of a trademark must meet. The representation must be in a form that uses generally available technology that can be reproduced on the register in a clear, precise, self-contained, easily accessible, intelligible, durable and objective manner. Most importantly, this means companies can now protect their trademarks in the way they are actually represented in today’s marketing channels on television, radio and the web.

The Estonian Circuit Court has awarded nine collective management organisations appro[A1] x 3.5 million euros as compensation for inadequate private copying levy legislation in Estonia. The decision of the Circuit Court has not yet entered into force and the parties have the opportunity to file an appeal in cassation against the decision with the Supreme Court by 30 July 2020 at the latest.

According to the Information Society Directive, a member state is obliged to adopt an adequate legal mechanism that would guarantee right holders equitable remuneration in return for introducing the private copying exemption to its legislation. The private copying levy is paid by consumers when purchasing recording or storage media or services. The list of levied products was last updated in 2006 in Estonia and an update has been heavily debated. The Estonian Supreme Court had previously acknowledged the need to amend the law in 2016, but the requirements are still not met. The Ministry of Justice has indicated that a proposal for amending the private copying levy regulation is to be introduced in the autumn of 2020.

The Estonian Patent Office supports a case-by-case approach and has highlighting various procedural measures already available under applicable law for IP matters during the covid-19 emergency situation in Estonia.

In most cases, an application from the applicant or the applicant’s representative is required. It should be taken into account that the emergency situation in Estonia ended at midnight of May 18 and applying these measures should be further substantiated by the applicant.

The new amendments to Regulations No. 723 of the Cabinet of Ministers On the Price List of Paid Services of the Patent Office enable owners of industrial property rights at no cost to extend deadlines, renew rights or continue proceedings in the case of non-observance of time limits.

The Latvian Patent Office can withdraw a fee for these services if an owner of industrial property rights could not observe time limits due to the COVID-19 restrictions. Advantages for COVID-19 affected persons apply during the state of emergency and four months after its end, i.e., to 10 October 2020. The new amendments entered into force on 8 May 2020.

The amendments were initiated due to information received from the owners of industrial property rights who do not reside in Latvia and cannot meet the set deadlines. The amendments are crucially beneficial, since the majority of the owners of industrial property rights are persons or companies abroad without a declared or legal address in Latvia.

The Latvian Patent Office has created a new database on patents and supplementary protection certificates by digitalizing and migrating data from several existing sources and compiling them into one source that is accessible, convenient and free of charge. The database contains information about over 6000 Latvian patents and 38 000 European patents plus almost 500 supplementary protection certificates.

Previously, full information about European patents which were valid in Latvia could be obtained by requesting the Patent Office to issue a notice. So the new database could be useful in order to check existing and expired patents, find licensors, prevent violation of patent owner rights, avoid development of existing methods and get inspiration for new innovations.

Search for Latvian or European patents in the Latvian patent register is available here.

Search for supplementary protection certificate in the Latvian patent register is available here.

On 6 March 2020 the Industrial Property Board of Appeal left in force the Patent Office’s decision by which it rejected registration of the trademark “MORE THAN LAW”, which was filed by a Latvian law firm (Applicant).

The mark was applied for registration for Nice Class 45 – legal services. It was a word mark, and it did not consist of any additional graphic elements. Registration was rejected on the basis of not having any distinctive character with respect to the services applied for.

According to The Board of Appeal, in different contexts the word “law” can have several meanings– “written legal act, jurisprudence, legal profession etc.” Therefore, it disagreed with the Applicant’s arguments that the word “law” can only be interpreted with the meaning of a “written legal act”. The Board also rejected the argument that the mark consists of designations that are abstract and imaginative. Although the word “law” may have different meanings, all of them refer to jurisprudence and to professionals with legal knowledge (lawyers). Thus, these meanings are closely related.

There was no dispute that the factual meaning of the mark was to point out that the legal services offered will be broader than those available on a daily basis. However, several law firms locally and abroad offer a wide range of legal services, which may include not only some of the traditional legal disciplines, but also representation in different financial and investment transactions, mergers and acquisitions, disputes, etc. Accordingly, the mark does not have a distinctive character and consumers will not recognize it as attributable to a single, specific provider of legal services.

Since the mark could not provide a sufficient level of differentiation from any other providers of legal services, the Patent Office’s decision was left in force and registration of the mark was rejected.

What we can learn from this case?

Use of different professional terms and slogans in trademarks is not prohibited even if they are of a specific nature. However, slogans or designations seen as descriptive or highly attributable to the nature of goods or services under which the application is filed generally cannot be registered as trademarks.

Sorainen advised Švaros broliai on developing a franchised network of tunnel car wash sites and on other IP matters.

On a proposal by the Ministry of Justice, the Lithuanian Government has formed a Commission for Intellectual Property Protection.

The main purpose of the Commission will be to ensure a higher level of IP protection as well as to encourage cooperation between institutions responsible for particular fields of IP.

The Commission is expected to take part in coordinating positions on technology-based challenges related to IP such as artificial intelligence, 3D printing, rapid digitalisation, e-commerce, etc.

Due to restrictions caused by the COVID-19 outbreak, the Lithuanian Government had suspended the terms for paying fees related to patents, trademarks and designs, as well as the terms for performing particular actions established under IP laws.

Suspension of terms was foreseen until the withdrawal of restrictions related to the free movement of persons and freedom of economic activities.

Since the 2019 reform of the trademark system in Lithuania, the Appeal Division of the State Patent Bureau has been entitled to examine applications for invalidation of trademark registration.