As the only truly pan-Baltic law firm, last night, Sorainen was presented with the 2021 Baltic Deal of the Year award, as well as the Deal of the Year Estonia and Lithuania awards by CEE Legal Matters. The recognition follows a successful year for the firm, also named CEE M&A Legal Adviser of the Year by Mergermarket last week, being the first Baltic law firm to win the title.

Deal of the Year Baltics – largest M&A transaction in 2021

The pan-Baltic Deal of the Year award was awarded to Sorainen for advising Fortum, a European energy company with activities in more than 40 countries on the sale of its district heating business in the Baltics to Partners Group, a leading global private markets firm, acting behalf of its clients. With a total consideration of EUR 800 million on a debt- and cash-free basis, this was the biggest M&A transaction in the Baltics in 2021.

We advised Fortum in all stages of the transaction in all Baltic countries. Our services included the preparation for the sale via an auction process, conducting vendor due diligence of the Baltic business, buy-out of a minority shareholder in Estonia, Baltic level group restructuring, participating in expert sessions with the bidders, Baltic level project management and drafting of transaction documents as well as any questions related to competition law matters.

In Estonia, Sorainen advised all three shortlisted deals with the record-breaking IPO of Enefit Green being chosen as the 2021 Deal of the Year Estonia. We advised the book-runners of the IPO on the successful offering and listing of the shares on the main list of the Nasdaq Tallinn Stock Exchange. The Enefit Green offering was arranged by Swedbank, Nordea, and Citigroup. A total of 60,335 retail investors participated in the initial public offering (IPO) of the shares of the renewable energy company Enefit Green, exceeding the previous record multi-fold and establishing Enefit Green as a truly public company. The total volume of subscriptions was four times more than the base offering. To meet very high retail demand, the size of the IPO was increased from EUR 115 million to EUR 175 million.

In Lithuania, Sorainen dominated the shortlist, having advised all three shortlisted deals with the acquisition of Fortum’s district heating business in the Baltics by Partners Group being chosen as the 2021 Deal of the Year Lithuania. We advised Fortum throughout the transaction.

Other shortlisted deals included the Interactio Series A Round – the largest Series A round in Lithuania and one of the largest in the Baltics to date, and the Vilnius National Stadium PPP.

In 2020, CEE Legal Matters presented our team with the 2020 CEE Deal of the Year award for Lithuania for our work on the initial public offering (IPO) of state-owned energy company Ignitis Group.

The CEE Deals of the Year Awards are the most prestigious and highly regarded awards in the legal industry in Central and Eastern Europe. Read more here. 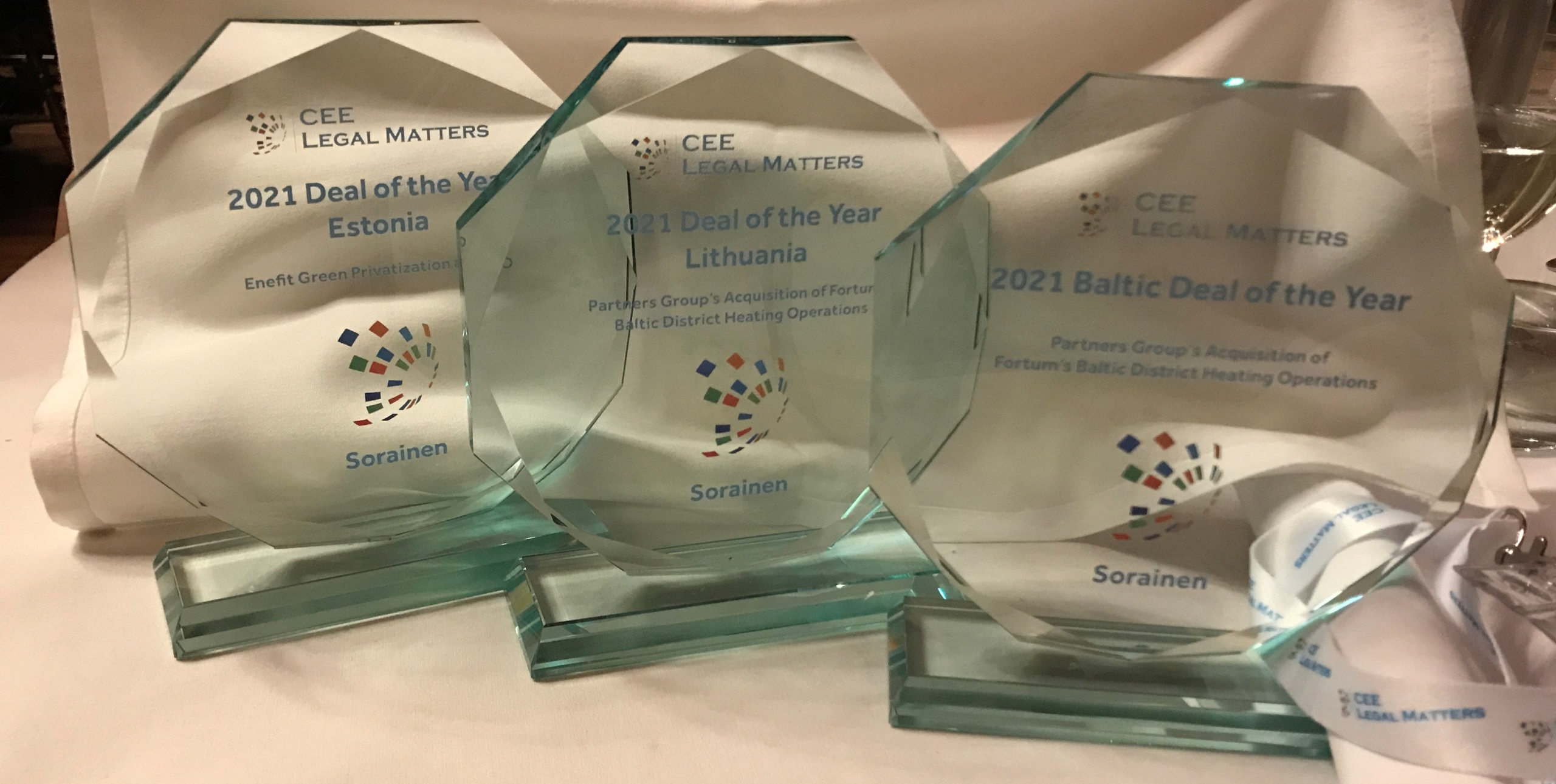