Following a booming 2021, the Baltic M&A market unsurprisingly slowed down both by transaction numbers and values in 2022 in response to the global economic downturn, the energy crisis, rising interest rates and geopolitical tensions triggered by the Russian war in Ukraine. Thankfully, the sanctions against Russia have had little effect on deals and businesses in the Baltics.

The number of announced transactions in the Baltics dropped by 16% in 2022 compared to 2021, while deal values showed a 7% decrease, triggered by lower deal values in Estonia, according to the global M&A intelligence tool Mergermarket. However, all the numbers were far above pre-pandemic levels and are expected to remain so. In 2023, we predict that the renewable energy, defence and medical sectors will thrive and drive the M&A deal market (the upcoming Baltic M&A and Private Equity Forum will feature focus panels on all those sectors). Furthermore, ESG considerations will have an increasing presence in M&A deals. 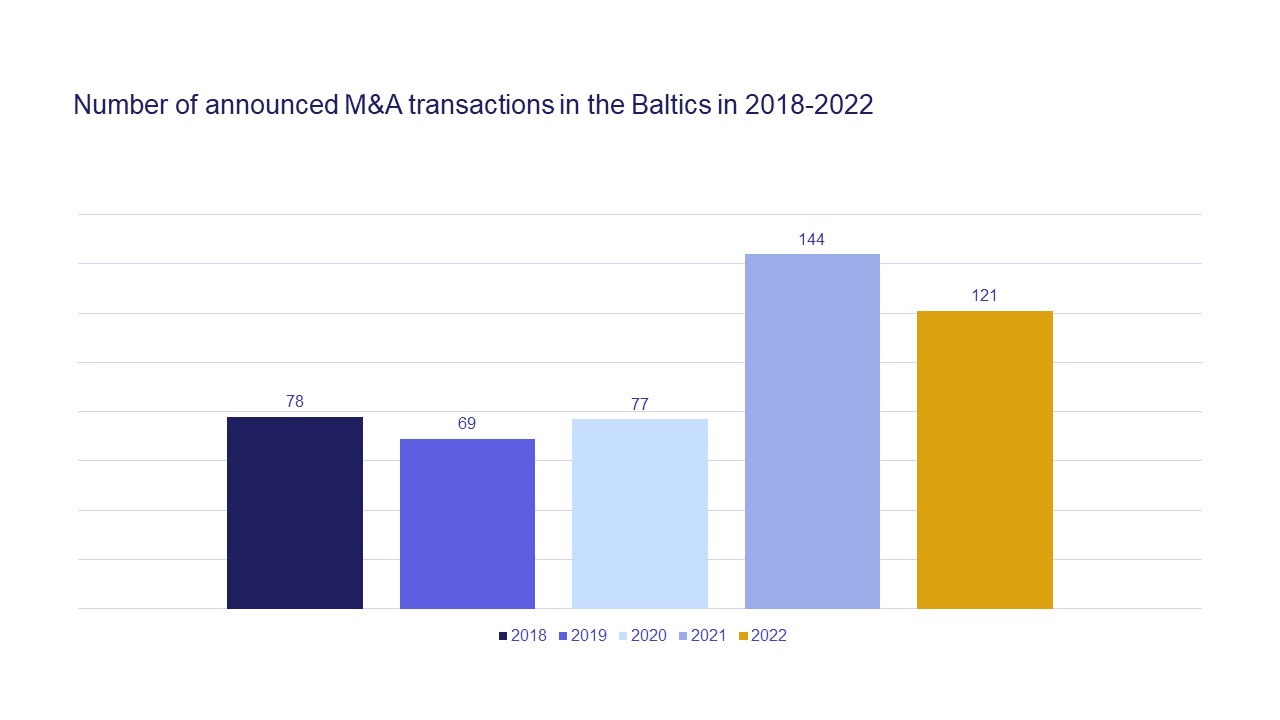 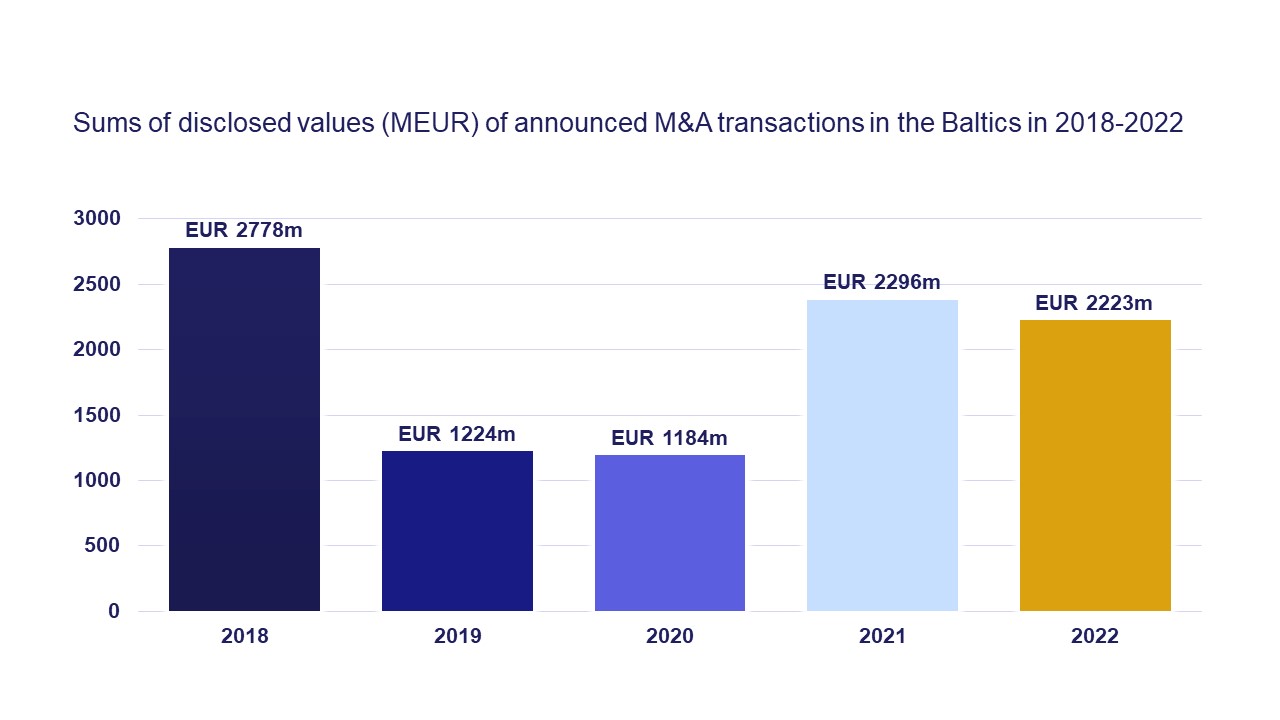 We note that Mergermarket statistics include only values that were disclosed by deal parties to Mergermarket or publicly; thus, the numbers in the table do not fully reflect the actual size of the M&A market in the Baltics but indicate only general tendencies.

The Estonian M&A deal market has clearly suffered the biggest hit of all the Baltic countries in 2022, both by deal count and value compared to 2021. Both Latvia and Lithuania witnessed a small decline in the number of big M&A deals in 2022 compared to 2021, but the values of the deals increased, reaching a slightly higher level in Latvia while jumping up by as much as 65.1% in Lithuania, reaching an all-time record. Nevertheless, Estonian disclosed deal values still leave its neighbours far behind, the key reason being huge capital raisings. 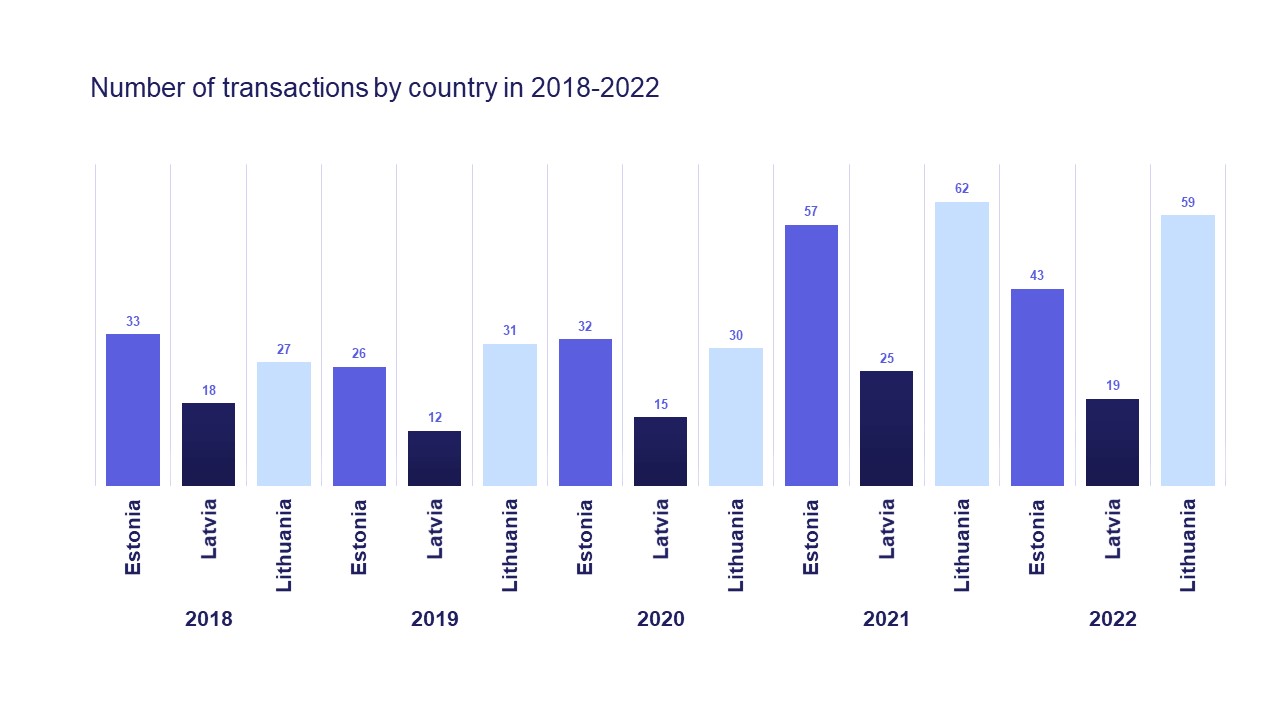 We note that Mergermarket statistics include only values that were disclosed by deal parties to Mergermarket or publicly; thus, the numbers in the table do not fully reflect the actual size of the M&A market in the Baltics and indicate only general tendencies.

TMT and energy sectors continue to lead the way

The TMT and energy sectors were clearly the main drivers of the Baltic M&A market in 2022, with both of the sectors’ shares in the total M&A deal sector split growing compared to 2021. Deal activity also grew in the medical and financial services sectors, while the real estate and construction and services sectors slowed down. 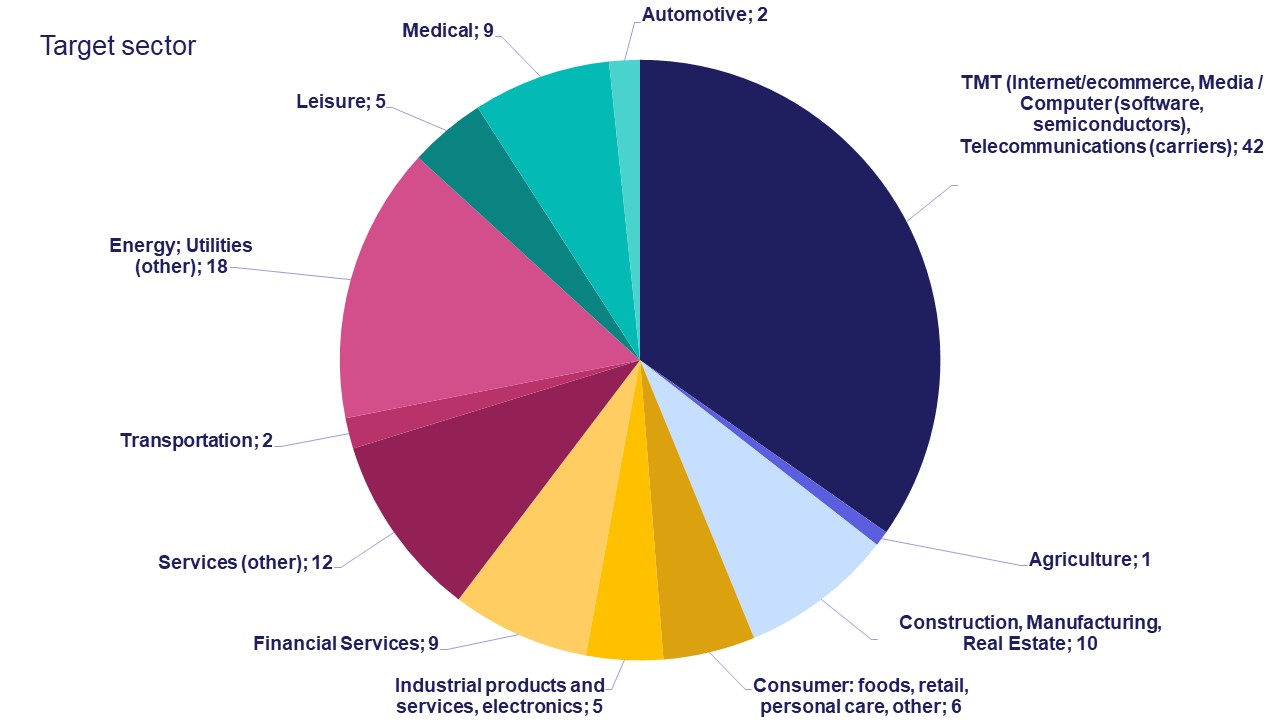 Baltic transactions continue to be dominated by fundraising rounds in the tech sector. At the beginning of 2022, Bolt Technology announced the largest-ever fundraising round in the Baltics (EUR 628 million), followed by major capital rounds by Veriff and Nordsec, who both reached unicorn status (valuation over USD 1 billion). Nevertheless, the downturn of the global tech stock markets has had its effect. While Estonian startup sector raised its highest ever amount of capital annually (totalling EUR 1.4 billion), the majority of this (roughly 1 billion) was raised in the first quarter of the year. Fundraising activity in Latvia and Lithuania was more evenly distributed.

Among other notable transactions, Blackstone made a follow-on investment in Luminor bank and bought out Nordea’s remaining shareholding in the bank whereas Invalda INVL and Šiaulių bankas signed a deal on the merger of their retail businesses. The energy sector continued to be active, with Ignitis acquiring major solar projects in Lithuania and Sunly raising EUR 200 million in a round led by Mirova. At the end of 2022, Maag Grupp announced the acquisition of HKScan’s Baltic businesses. 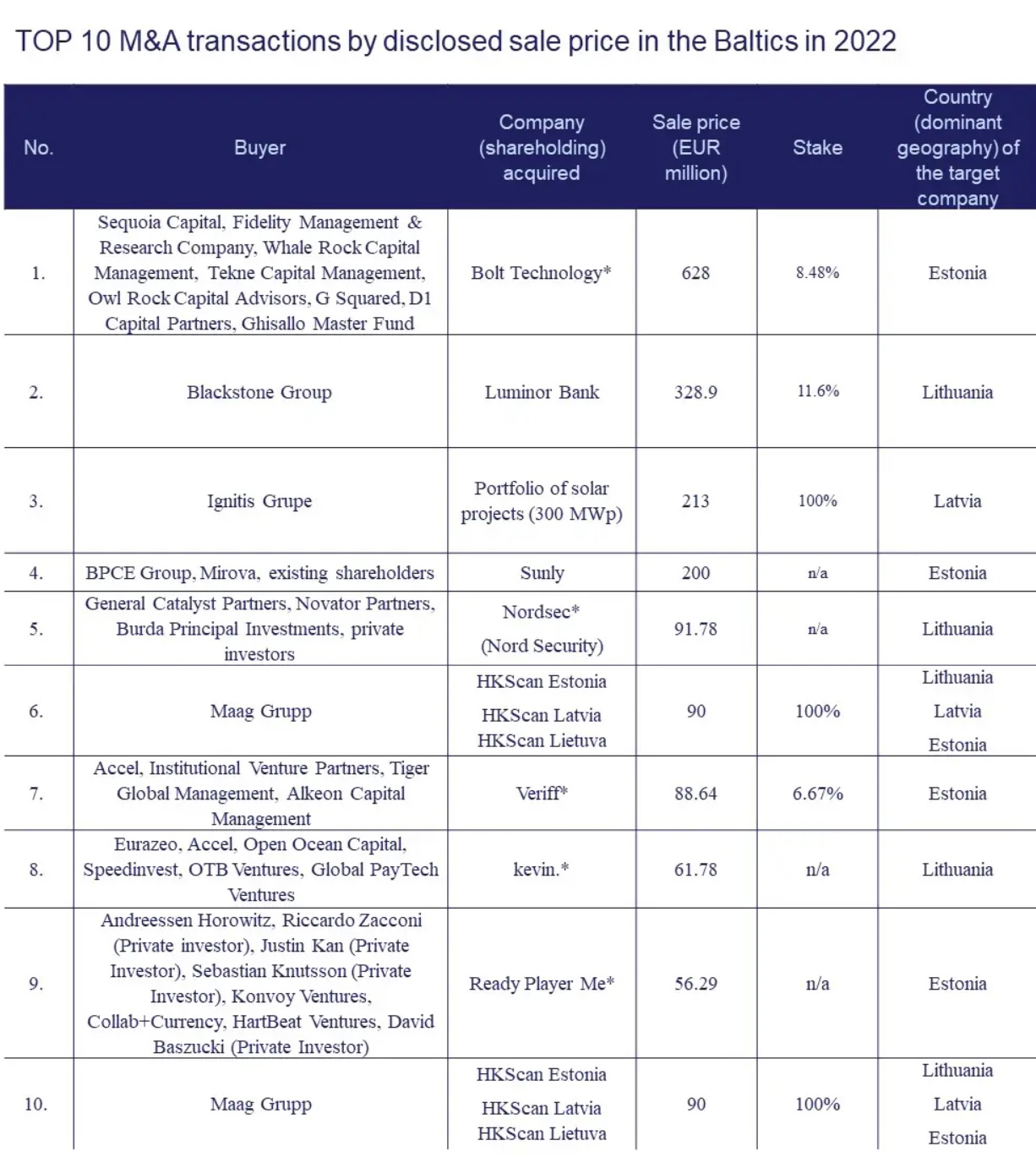 In the table above, startup companies are marked by *

This summary has been prepared on the basis of the information in the Mergermarket transaction database and publicly available data.

Estonia: a year that started with a bang ended with an almost 25% drop

The M&A deal market in Estonia started 2022 with a bang when Estonian startups raised a total of EUR 1 billion in capital within the first four months of the year. On the frontline of raising capital was Bolt, the fastest-growing mobility platform in the world, raising EUR 628 million in the biggest funding round in the Baltics’ history. However, the startup sector slowed down significantly, both in terms of fundraising and exits, starting from Q2 until the end of the year, which is a direct result of a global crash in tech stock, a decline in capital markets and Russia’s war in Ukraine, which affected valuations and increased inflationary pressures.

The industrial sector had a tough year, with input prices growing, loan capital becoming more expensive and turnover of goods decreasing. The market saw the sale of several distressed assets, and this trend is likely to continue in 2023.

The year 2022 witnessed the consolidation of the private medical sector, which has great potential and is likely to thrive in 2023 too. In addition, renewable energy and defence sector startups are likely to show impressive results in 2023.

This year will be affected by the adoption of the Foreign Direct Investment (FDI) and cross-border mobility directive. The FDI directive is expected to enter into force in Estonia on 1 May 2023, imposing the obligation to obtain an authorisation for investments by non-EU investors in strategically important areas falling under the scope of the regime, including providers of vital services (e.g. energy, transport and communications); state-owned enterprises, manufacturers or suppliers of military goods and/or dual-use items. 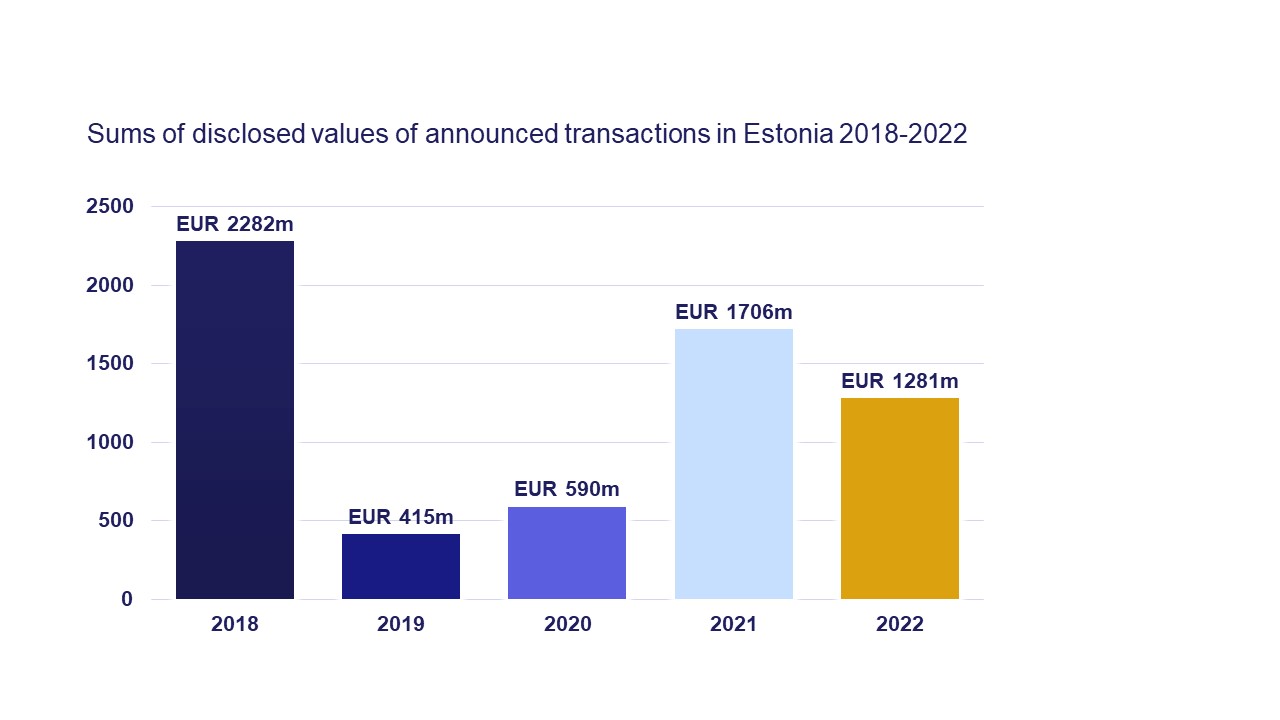 We note that Mergermarket statistics include only values that were disclosed by deal parties to Mergermarket or publicly; thus, the numbers in the table do not fully reflect the actual size of the M&A market in Estonia and indicate only general tendencies.

Latvia: While the value level of major M&A deals remained the same, the number of such deals dropped by 24%

The number of big M&A deals dropped by 24% in 2022 compared to 2021 (from 25 deals in 2021 to 19 in 2022), however, deal activity still surpasses the levels of 2020 and some earlier years. The value level of major M&A deals remained the same, when 2021 is compared to 2022, but looking back at earlier years, deal value has been much lower in recent years. Looking more broadly at the deal scene (not just the larger deals as reported by Mergermarket), largely due to the war in Ukraine and therefore the increased geographical risk, 2022 has been a year of transactions with smaller average values and investors coming more from within the Baltics or near-by regions (CEE, Nordics) where there is more information and understanding of the said geographical risk. As for sectors, energy has been the leader by far. 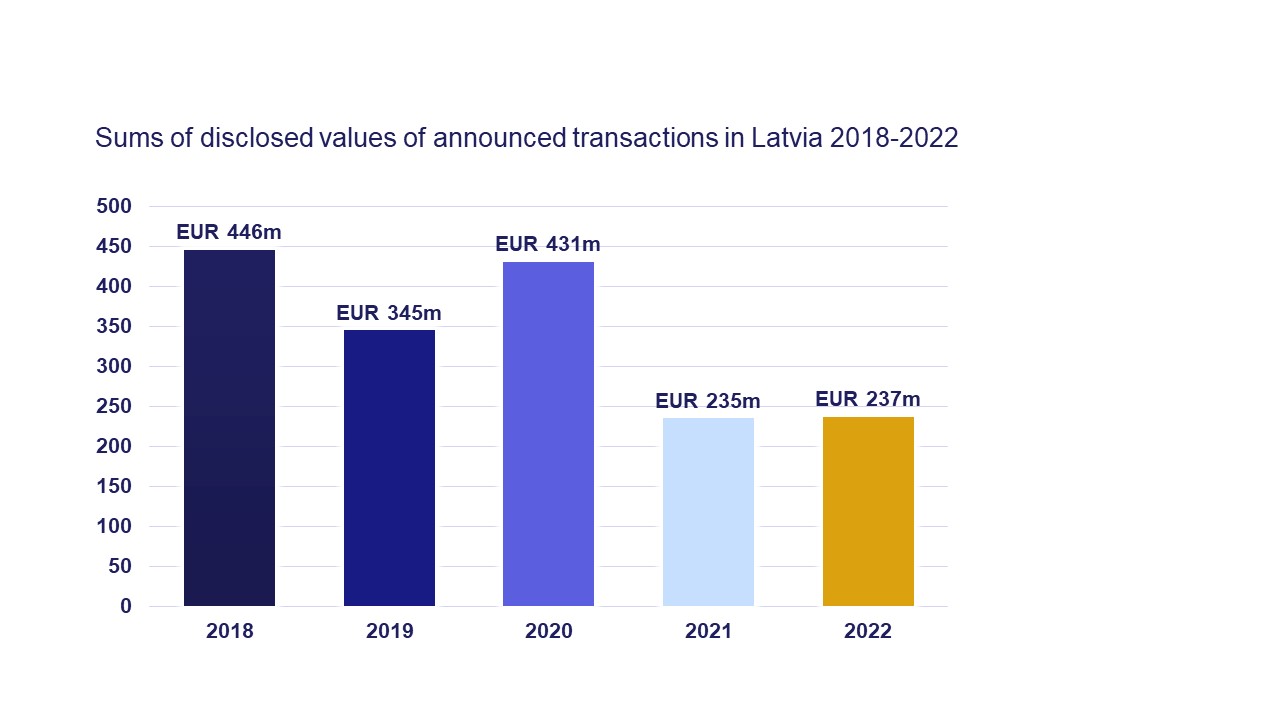 We note that Mergermarket statistics include only values that were disclosed by deal parties to Mergermarket or publicly; thus, the numbers in the table do not fully reflect the actual size of the M&A market in Latvia and indicate only general tendencies.

The number of big M&A deals in Lithuania dropped a little compared to 2021, but remained double the total during the pandemic and pre-pandemic years annually. In contrast to a trend of sharp decline in Estonia and stability in Latvia, in Lithuania M&A deal values jumped by 65.1% in 2022 compared to 2021 (from EUR 356 million in 2021 to EUR 705 million in 2022) despite a slight decline in the number of deals (though it is very likely that the increase in the total disclosed deal value is more attributable to disclosure of the values of bigger deals compared to last year rather than an actual increase in deal sizes). The most active sectors for M&A activity were TMT (with not only technology but also the media sub-sector also being very active), renewable energy and healthcare. At the same time, in line with trends in other countries, the startup sector in Lithuania in 2022 was calmer than in 2021. Looking back at 2022, it could be said that the war in Ukraine may have postponed or even caused the cancellation of some transactions as it increased the country’s geographical risk profile. However, the period of fear was rather short-lived and didn’t have a drastic effect on the M&A market – quite the contrary: the M&A market in Lithuania was relatively strong throughout 2022. 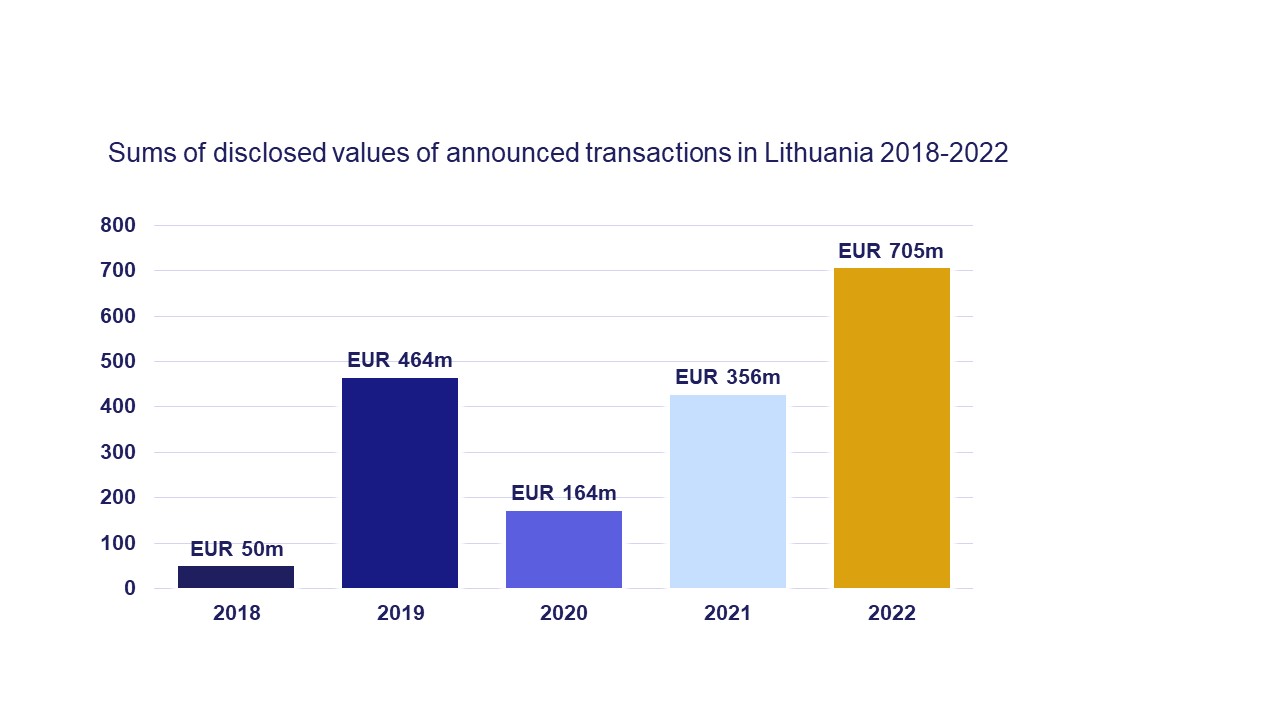 We note that Mergermarket statistics include only values that were disclosed by deal parties to Mergermarket or publicly; thus, the numbers in the table do not fully reflect the actual size of the M&A market in Lithuania and indicate only general tendencies.

A well-known networking platform for Baltic transaction market players, the forum brings together 200+ participants each year. Come join PE and VC funds, investment bankers, lawyers, advisers, company managers and shareholders to get an update on what the market is up to.

The 2023 forum will be held at a famous location in Riga – a former rail cargo warehouse turned modern venue in the New Hanza area, one of the trendiest neighbourhoods in Riga.

Trusted M&A advisors at your service 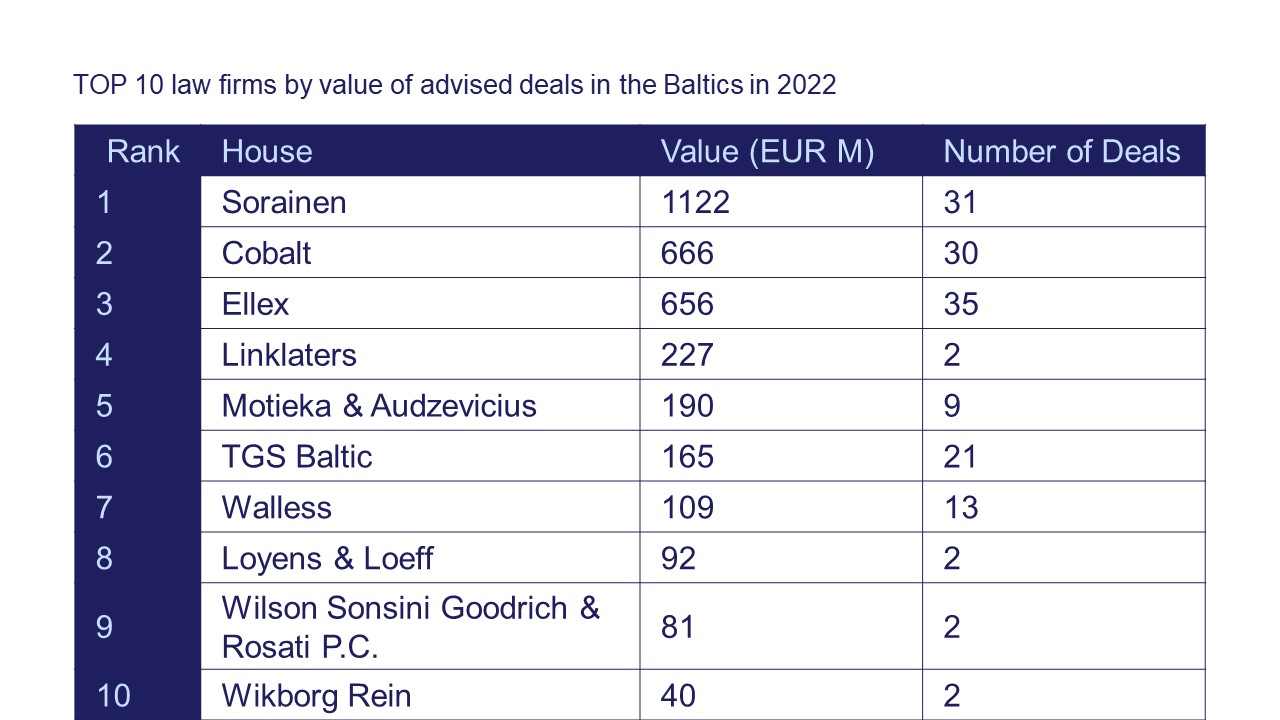 The study analysed 155 private M&A transactions with a deal value over EUR 1 million completed in the Baltics during the period April 2020 – March 2022. The analysis provides a thorough overview of the most active sectors, sales processes and forms of transactions, payment terms and liability provisions and much more.

Contact our M&A and private equity experts for more info: Piret Jesse in Estonia, Eva Berlaus in Latvia and Mantas Petkevičius in Lithuania.